The outrage that followed the apparent promotion of Hans-Georg Maassen has forced Angela Merkel's government into renewed talks. In the fallout, some 67 percent of Germans have lost faith in the chancellor's coalition. 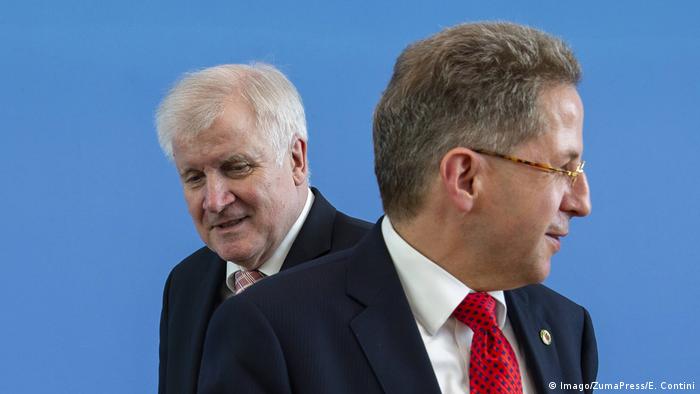 Amid unrelenting criticism, Chancellor Angela Merkel's tenuous governing coalition will meet on Sunday to renegotiate the fate of former domestic intelligence chief Hans-Georg Maassen. Merkel is set to meet with CSU leader Horst Seehofer and Social Democrat leader Andrea Nahles for another shot at a compromise.

Maassen came under fire last week for questioning the validity of a video that showed a far-right mob chasing foreigners in the eastern German city of Chemnitz, and for his links to the far-right Alternative for Germany (AfD) party. Amid calls for his resignation, Merkel's coalition removed Maassen from his post, but relocated him to a higher level job with higher pay.

The move drew outrage across the political spectrum. A weekend survey by pollster Emnid for German weekly Bild am Sonntag showed that in the aftermath, some 67 percent of Germans no longer believe the three coalition leaders can work together. Nonetheless, a majority of the public is against the break up of the government and new elections, which effectively puts greater pressure on coalition leaders to make things work.

Strong objections to Maassen's apparent promotion pushed the SPD's Nahles to insist on the new round of negotiations. "The government will not collapse over the Maassen case," Nahles told Bild am Sonntag, in a bid to reassure an anxious public. Merkel signaled on Friday she was open to the new talks.

CSU's Seehofer, for his part, rejected the notion that Maassen holds right-wing extremist positions and insisted he should stay in his new post.

The interior minister added there would be "many phone calls over the weekend" and there would only be a meeting on Sunday if he deems the SPD's demands legitimate enough to find a suitable solution.

Forty-three percent of Germans surveyed answered that Seehofer had lost credibility in their eyes.