Germany's ruling coalition parties have agreed changes to a draft law that would narrow the gender gap on pay. Medium and large firms will be most affected by the new plans. 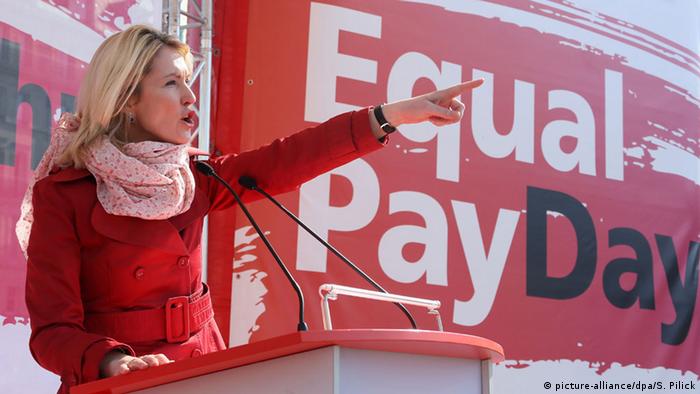 Under plans drawn up at Thursday's meeting, workers at German businesses with 200 employees or more will have a right to claim information on "whether they are unfairly paid", said Thomas Oppermann, leader of the Social Democrats' (SPD) parliamentary group.

Businesses with 500 or more workers would face additional scrutiny, and be forced to provide regular reports on their pay structures.

Oppermann said 14 million workers across Germany would benefit from the new rules, which he said was a "great step forward.

The Christian Social Union (CSU) regional group leader Gerda Hasselfeldt said the changes would be much less bureaucratic than the original draft law.

But the opposition Green party criticized the revisions, saying the law would be ineffective for most women employees, who work for small and medium-sized enterprises.

Even if structural disadvantages were discounted - the same position in the same industry and holding similar qualifications - the wage discrimination gap was still seven percent.

Germany trails behind most other European countries in terms of equal pay, according to the 2014 data. Slovenia, Malta and Italy have the best records with just a three to eight percent difference.

The Interior Ministry says Germany's gap is partly down to "indirect discrimination," where women are given fewer chances to reach management positions, despite never having been better qualified.

Women still do not earn as much as men

Women earn 25 percent less than men, according to statistics, and there are many jobs which they would never have a chance of getting. Would a quota help? (20.11.2013)

Despite legal support and public visibility, women are still paid less than their male colleagues in Germany - and at an alarming rate. On Equal Pay Day 2015, Germans took to the streets in protest. (20.03.2015)