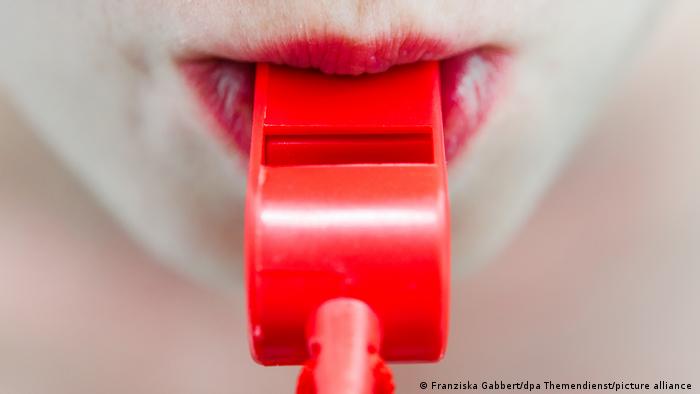 Whistleblowers would be granted more legal protection and greater security under the draft bill approved by the German Cabinet on Wednesday.

Though the European Union's whistleblower directive should have been implemented into German law by 2021, the previous government could not reach a deal on the changes.

Federal Justice Minister Marco Buschmann, a member of the Free Democrats (FDP), had drafted the bill for the protection of people who reveal misconduct, abuse and other types of violations in corporations or in public administration.

"Employees in companies and public authorities are often the first to notice grievances and can ensure that violations of the law are discovered, investigated, prosecuted and stopped," Buschmann said.

Effective protections for whistleblowers could be "an essential building block for a good compliance system that strengthens a positive culture of mistakes," he added.

With the current legislation, whistleblowers submit themselves to significant risk when reporting misconduct or abuse.

What exactly does the legislation draft say?

Companies with 50 or more employees would be required to set up some form of internal reporting system. However, those with fewer than 250 employees will be able to do so in partnership with other medium-sized employers to contain costs.

The new legislation would protect whistleblowers specifically by banning reprisals, whether those be through dismissal, warnings, disciplinary measures, discrimination, bullying or damage to their reputation.

MADE - Whistleblowing: Speaking truth to power

In case of reprisals, whistleblowers would be able to lodge legal claims against their employers.

If the misconduct doesn't carry "legal relevance," the legislation does not apply, a spokesperson for the Justice Ministry said.

According to the draft legislation, evidence submitted to the press will only be protected in exceptional cases. The same applies to allegations that are published on social media.

According to the text, the aim is to "expand" on protections that have so far been "fragmentary and insufficient."

Civil society organizations such as the German Federation of Journalists (DJV) and Transparency Germany criticized the proposed law as insufficient.

Frank Überall, the DJV’s national chairman, said all whistleblowers deserved protection, "no matter what violation of the law they uncover." Though some violations might be formally legal but illegitimate behavior, whistleblowers should still be able to publish them without having to fear personal reprisals, he said.

Sebastian Oelrich, who is responsible for Transparency Germany's whistleblower protection group, said classified information was often excluded from protection. Reporting these types of violations to an internal reporting office was not sufficient, as the prominent example of Edward Snowden in the United States illustrated, he said.

The German parliament has subjected the country's intelligence service, the BND, to increased government scrutiny. But critics object that it also gives the BND wide-ranging new powers to spy on foreign nationals.