German bus driver sacked for displaying 'I am German' sign

A German bus driver in the city of Dresden has been fired for displaying a sign in Germanic script advertising his nationality. The city's public transport authority has been forced to find new recruits abroad. 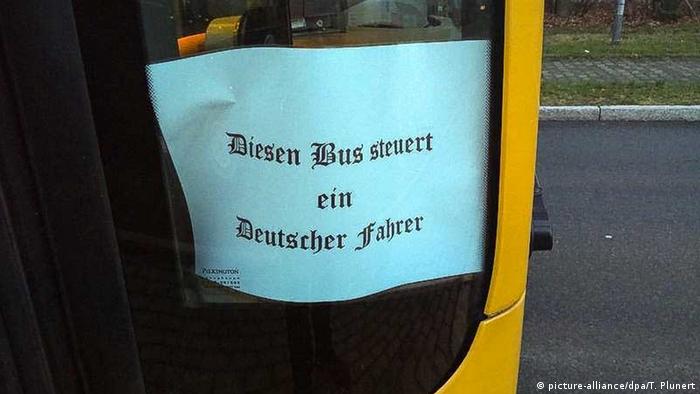 Dresden's public transport authority has been forced to explain why one of its drivers displayed a sign reading "This bus is steered by a German driver" next to the door of his bus.

Passenger Peter Dörffel spotted the sign, which included a grammatical error, and took a photo of it, later telling local media portal Tag24, "I was amazed when I saw it."

"What shocked me the most was that I'm not even surprised anymore," the 23-year-old added. "Things like this are slowly becoming normal."

The photo quickly triggered toxic fallout on Twitter, prompting Dresden's transport authority (DVB) to post a response to one expression of outrage: "Hello, the message has reached us. We're also wondering what's wrong with this colleague. He is no longer on the road and this behavior will have consequences."

DVB spokesman Falk Lösch told local public broadcaster MDR Sachsen that the driver belonged to a subcontractor company that had quickly been contacted. "This behavior is totally unacceptable," he said. "This bus driver will no longer drive on DVB lines."

According to Tag24, the head of the subcontractor in question, Matthias Peschke, was also horrified when he saw the photo. "This is a shocking situation for us," he said. "This is a long-term employee of ours. His service has now been discontinued. He won't be in the schedule tomorrow."

The situation is particularly embarrassing for the DVB because it has been actively seeking bus drivers abroad, as it is struggling to find enough drivers to fill the vacancies on its expanding network.

In October, the local Sächsische Zeitung newspaper reported that the DVB went on a recruitment drive in Serbia, bringing in 19 new drivers, though they have to attend German language lessons and jump a number of bureaucratic hurdles to be able to work in Germany.

The authority needs at least 570 drivers a day to fill all its shifts, and DVB boss Jan Silbermann complained to the regional paper at the time that the domestic job market had been "swept clear."

Public transport is one of the many areas where Germany is lacking skilled workers. On Monday, the German government agreed a new plan to bring more non-EU workers into Germany, with initiatives to help with language training and expedite visa procedures.

The city council in Dresden recently passed a resolution declaring a "Nazi emergency," noting that "anti-democratic, anti-pluralist, misanthropic and right-wing-extremist attitudes and actions, including violence in Dresden, are occurring with increasing frequency."

DW sends out a selection of the day's news and features. Sign up to the newsletter here.

Detectives have said they will give €500,000 for clues that lead them to the culprits in one of Germany's biggest heists. The financial appeal comes after thieves made off with priceless 18th-century jewelry sets. (28.11.2019)