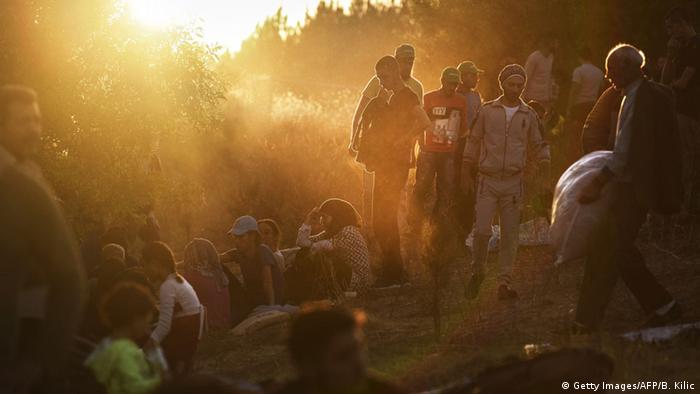 "No border, no fence in this world can stop a modern mass migration of people," Gabriel said at a meeting of European center-left Social Democrats in Vienna.

"We need about 5 billion euros in the next months. Europe has to do its part," he added, while urging the US and Gulf States such as Saudi Arabia to contribute to such funding. 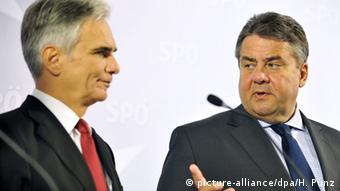 The US, through its past interventions in Iraq, bore "significant responsibility" for refugees, Gabriel said, adding that the US and Russia needed to work together.

"If we have a new lost generation in refugee camps then this will be the pool from which the next generation of terrorists will emerge," he warned.

On a visit to London, US Secretary of State John Kerry said Saturday that the key to Syria's crisis was to negotiate the departure of President Bashar al-Assad. Kerry is due in Berlin on Sunday.

"The money must flow in this week," Schulz told a SPD gathering in the northern German city of Kiel while referring to refugee camps in Jordan, Turkey and Lebanon, where many thousands live in makeshift conditions.

When these intake quotas were exceeded then politically persecuted persons should be sent back to the home regions, where they must be helped, de Maiziere told the magazine.

Another influential German conservative, Wolfgang Bosbach, who in recent months voted against the Merkel government's overall approval of bailouts for Greece, warned that Germany could soon be "overwhelmed" by its intake of refugees expected to exceed 800,000 by year's end.

"It is correct when Angela Merkel said that our asylum law recognizes neither highest figures nor quotas. But that does not mean in the reverse sense that our country's absorption capacity and integrative power is unlimited," said Bosbach, who chairs the federal parliament's interior affairs committee.

Croatian Prime Minister Zoran Milanovic said Zagreb went ahead despite the rejectionist stance of Prime Minister Viktor Orban of Hungary, which early this week finished a fence along its border with Serbia to keep out refugees.

Hungarian Foreign Minister Peter Szijjarto on Saturday accused Croatia of violating his nation's sovereignty by forwarding migrants to a border crossing "without any kind of prior permission."

A Hungarian Defense Ministry spokesman said a 41-kilometer (25-mile) segment of fence had been completed along a border portion with Croatia on Friday night.

In Slovenia, police said nearly 1,300 migrants had entered as of Friday night when a helmeted squad used pepper spray to stop 500 migrants, some with children, at the Harmica border crossing.

Slovenian media said hundreds of those who had managed to enter Slovenia were headed on foot toward Austria en route to western Europe, including Germany.

Nemanja Rujevic, reporting from the Croatian border with Slovenia, said families were given priority by Slovenian authorities.

In the Mediterranean Sea off the coast of Libya, 4,343 migrants were plucked from smugglers' boats in a coordinated rescue on Saturday involving volunteer and naval teams, according to the Italian coast guard.

Those rescued from eight fishing boats and 12 rubber motorized dinghies were brought to southern Italian ports. A woman's body was found in one dinghy.

Babar Baloch, a Budapest-based spokesman for the UN's refugee agency, told the Associated Press that 80 percent of people entering Europe through the Balkans were from Syria, Afghanistan and Iraq.

The other 20 percent were from nations such as Pakistan, Bangladesh, Burundi and sub-Saharan Africa, Baloch said.

Mitko Cavkov, the interior minister of non-EU member Macedonia, told visiting EU enlargement commissioner Johannes Hahn on Saturday that Europe must develop a "consistent" approach to the refugee crisis. Cavkov and Hahn spoke during a tour of a key migrant transit camp on the border with Greece.

Macedonian police say more than 83,000 migrants have been registered as passing through the Balkan nation in the last three months.

At least 15,000 extra teachers will be needed in Germany to tutor an estimated 300,000 school-age refugee children expected this year, according to two teachers' trade unions quoted by the newspaper "Die Welt."

"We must reckon now with a growth in pupil numbers over a long period," said spokeswoman Brunhild Kurth.