German army veterans feel ′anger and grief′ at fall of Kunduz | Germany | News and in-depth reporting from Berlin and beyond | DW | 10.08.2021

The sight of Taliban fighters overrunning Kunduz in Afghanistan has triggered anger, grief and helplessness among German veterans who fought to free the city. Many now fear for the Afghans who helped them. 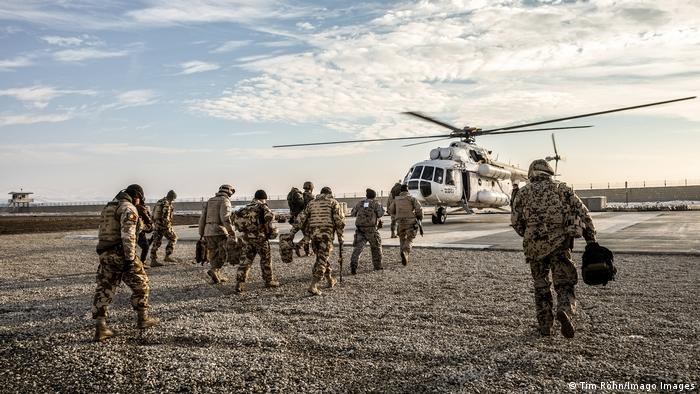 The fall of Kunduz to the Taliban is a devastating psychological blow to many German Bundeswehr soldiers, according to veterans of Germany's two-decade mission in Afghanistan.

"It triggered an earthquake in the emotions of veterans," said Wolf Gregis, a former soldier and now an author and researcher of pedagogy at the University of Rostock. "No other place is associated so much with the death toll that the German military suffered than Kunduz itself."

It was in the Kunduz province that the Bundeswehr suffered the most casualties and where the events that shaped the German public's abiding images of the Afghanistan war happened. "This is the place where German soldiers first learned on a large-scale what fighting and dying in an asymmetric war meant and how ugly that is," said Gregis, (the name is a pseudonym, which he prefers to go by).

Though it was initially seen as one of the safest provinces in the country, where Germany could take command of one of the NATO alliance's Provincial Reconstruction Teams and help build new infrastructure, fighting grew heavier in the region from 2006 onwards. It was Kunduz, according to Gregis, that put the purpose of Germany's mission in Afghanistan to the test — were the troops there to dig wells and keep schools safe, or were they simply fighting a war?

Several horrific incidents happened in the province: In September 2009, a German officer ordered a US airstrike on two oil trucks that left over a hundred people dead, causing a scandal back home that eventually cost then-Defense Minister Franz Josef Jung his Cabinet office. (Some doubt has since been raised over the accepted account, with federal judges familiar with the evidence saying last week that the casualties were likely to be lower — more like 40 — with fewer civilians among them.)

A year later, German soldiers were increasingly finding themselves in firefights with the Taliban, especially when a patrol was ambushed and pinned down in the nine-hour "Good Friday battle" of April 2010. Three soldiers were killed and eight more injured, their lives saved by a US helicopter. 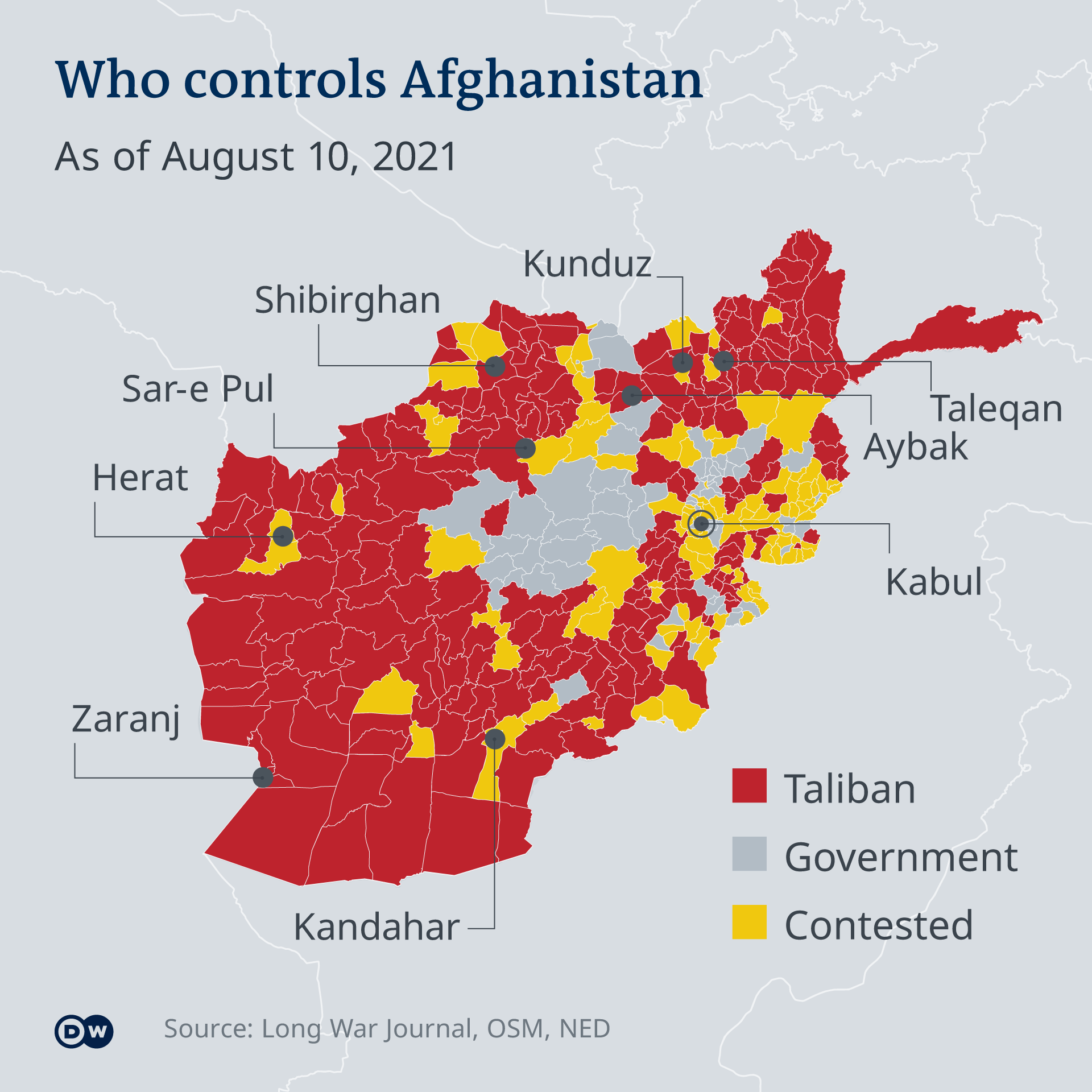 This marked the start of what the Bundeswehr has described as the "bloodiest year in its history." In all, German troops were stationed in the Kunduz province from 2003 to 2013, and altogether some 59 German soldiers lost their lives in Afghanistan during the two-decade mission.

The sight of Taliban fighters overrunning the city last weekend has left many German veterans shocked and angry. "It's hard to describe," said Andreas Eggert, who finished the last of his seven missions in Afghanistan in 2013 and is now a regional chairman of the German veterans' association (BDV). "A lot of things go through my head — on the one hand grief, on the other hand anger."

The anger, for someone who knew German soldiers who lost their lives, has several targets. "It's anger at the Taliban — that they want to force the people there back under their yoke," he told DW. "But I'm also angry at the decision of the German government and the Defense Ministry — this was so predictable, this damage."

Conflict in Afghanistan has spread to entire country: UNICEF

"It feels extremely shitty," said Johannes Clair, a former Bundeswehr corporal who published a book about his seven-month mission in Kunduz from 2010 to 2011. "We left blood, sweat and tears there,´; our comrades were killed there. And it was predictable. In 2014, when the combat troops were withdrawn, it was clear that the Afghan forces were not going to be able to control the situation on their own."

"The second thing is that, while we're all back home, the Afghans over there are in mortal danger, especially those that cooperated with the West — that makes it even worse," he added. "Now I'm sitting here and I can't do anything about it."

At the same time, Clair thinks the final withdrawal of Western troops this year was inevitable and logical because the whole mission had simply become what he called an "alibi mission — half-hearted. That's why I'm angry, because even though the fundamental problems in Afghanistan have long been known, even in 2010 when I was there, they were never addressed properly," he told DW.

For years, he said, NATO and the German government stumbled from one strategy to the next, hoping that it would work out, but largely because the mission was unpopular back home, the government never properly committed to its mission. That all culminated in the withdrawal of combat troops in 2014. "It was completely clear then that the positive effects that we had caused were not sustainable," he said. "We betrayed all the work we did there, but more than anything we betrayed the Afghans."

Andreas Eggert was also scathing in his assessment of Germany's political decisions. "Our defense minister said the decision (to withdraw) was without alternative — I agree, it was without alternative, but this decision could have been prepared differently," he said. "I'm very sad because I met many great Afghan people during my mission there, and I know they have to fear for their lives now or might even have already lost their lives."

The question of whether and how Afghans who helped the Bundeswehr can apply for asylum in Germany has become a political mess in recent weeks, caused by complex bureaucracy and what some have said is political indifference. "I think there was an international responsibility to prevent that, because it was so predictable," said Eggert.

Both Clair and Eggert felt that German troops were more popular among Afghans than US troops, because they were seen as more constructive, and less "militaristic," as Eggert put it. "They knew we brought a certain stability to the country, and jobs, and they were friendly — of course, you could never rule out that there were people among who were working with the insurgents," said Eggert.

Patrick Sensburg (CDU): 'I don't think the Taliban will win'

Despite the Taliban's resurgence, Eggert insists his fallen Bundeswehr comrades did not die in vain. "I don't think the mission was for nothing, I think it did change things," he said. "The soldiers who died defended the freedoms of Germans with their lives. We changed things in people's heads over there; we accompanied whole generations of people."

He also thinks that the international community would be well-advised to stay engaged with maintaining security in Afghanistan. "I think in a few years we'll be back there to start all over again to build up a destroyed country," he said.

The Bundeswehr's Kunduz base was handed over to the Afghan government in 2013, when German forces moved to a new headquarters in Mazar-e Sharif, further west.

Germany withdrew its last troops from Afghanistan at the end of June this year.

Opinion: Not too late to preserve fragile progress in Afghanistan

The international community must change its course in Afghanistan and stand by the people of the country to preserve the fragile progress that has been made over the past two decades and avoid even greater tragedy.

The Taliban have captured their sixth provincial capital in four days — including a city where German troops were stationed for a decade. Now, some want the Bundeswehr to go back in, but the defense minister says no.

The British foreign ministry warned of a high risk of terror attacks and "a worsening security situation" as the Taliban continued their offensive across Afghanistan.

Afghanistan: "Everybody is at risk"