Germany has finished withdrawing its last contingent of around 570 soldiers from Afghanistan as the security situation deteriorates. The move marks the end of a nearly 20-year mission. 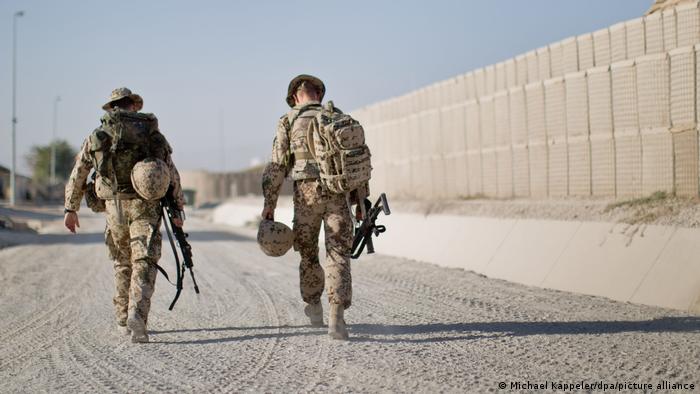 With US troops eyeing their final exit from Afghanistan in September, Germany pulled out all of its remaining troops on Tuesday. Last week, Germany's Defense Ministry said around 570 troops were still deployed.

The last of them have now been flown out of the northern city of Mazar — ending a nearly two decade-long mission. The contingent also included members of the KSK special forces, who were tasked with securing the camp during the move.

"This marks the end of a historic chapter  – an intense deployment that has challenged and shaped us," she wrote on Twitter.

She thanked the soldiers for fulfilling their duties in Afghanistan "with professionalism and conviction."

Looking back at the mission, the minister pledged to discuss "what was good, what was not good and what we've learned."

The German military had kept the details on the pullout vague on security grounds. Speaking just hours before the move was officially confirmed, Kramp-Karrenbauer said the withdrawal was happening "in an orderly manner, but also as swiftly as possible." Germany maintained a contingent of around 1,100 troops before starting the drawdown in May.

The four military planes carrying the troops are expected to make a stop in Tbilisi before landing in Germany on Wednesday. Their old camp will be handed to Afghani troops as Germany ends its participation in NATO's "Resolute Support" mission.

After landing in Germany, the soldiers will enter a mandatory two-week quarantine to curb the risk of the highly contagious Delta coronavirus variant. According to Der Spiegel magazine, at least one German soldier was infected with the variant earlier this month.

How long were German troops in Afghanistan?

Germany deployed its forces in the wake of the deadly 9/11 attacks on the US conducted by al-Qaida in 2001. The first troops arrived in Kabul in January 2002.

In the early stages of the mission, German soldiers were told that their deployment was aimed at stabilizing the country rather than fighting the Taliban.

Over 150,000 German soldiers have been stationed in Afghanistan over the years, many of them serving more than once.

The mission, which lasted for almost 20 years, cost the lives of 59 German soldiers.

It was the longest, most expensive and the bloodiest German deployment since WWII. According to UN data, the Afghanistan conflict claimed the lives of over 39,000 civilians since 2009. While most of them have been killed by the Taliban, international forces also caused civilian causalities, especially through air strikes. The US also lost 2,442 soldiers since the mission started.

What is happening in Afghanistan?

The end of the mission comes as the Taliban in Afghanistan rapidly seize new territory from the US-backed government in Kabul. Taliban forces are also positioning themselves around provincial capitals, prompting fears that they will seize full control once all foreign troops leave. The UN reported a spike in civilian casualties since last September.

The extremist Islamic militants were notably emboldened by the US pledge to finish its Afghanistan withdrawal this year. The administration of Donald Trump had pledged to complete the pullout by May this year. His successor, Joe Biden, changed the target date to September 11 this year, the 20th anniversary of the attacks which prompted the conflict.

While meeting with Afghanistan President Ashraf Ghani on Friday, Biden promised a "sustained" partnership between the countries. However, he did not signal any changes to the timetable due to the Taliban offensive.

"Afghans are going to have to decide their future," Biden told reporters.

The Taliban continues to take over districts across Afghanistan as the US and its NATO allies continue a military pullout. The UN has warned that provincial capital cities could soon fall into the hands of militants.