Media outlets' Facebook pages are often dominated by haters, but the German group #ichbinhier is talking back. It now has tens of thousands of members who are helping restore civility to social media. 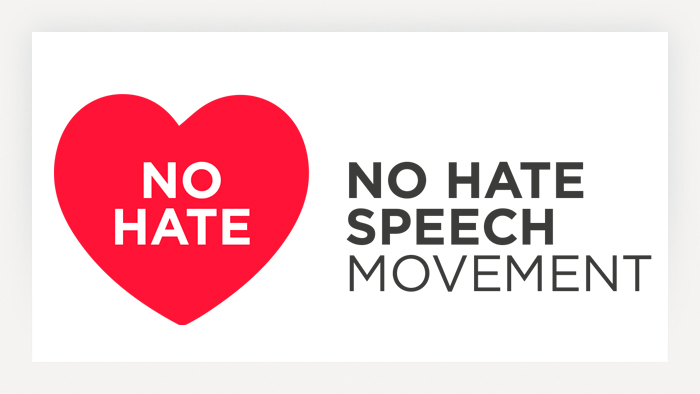 It's Friday evening, a couple of hours after the truck attack in Stockholm, and the Facebook page of a major German TV news station is filling up with comments inveighing against refugees and German Chancellor Angela Merkel. It's an all too familiar scene in an age when anyone can play pundit on social media and hateful tirades are part of political discourse.

But in this case, other users suddenly appear on the station's Faceboo page to confront the haters. What evidence is there that the Stockholm attacker was a refugee, they ask. How do we know he was religiously motivated? What does Merkel have to do with a one-off event in Sweden? Shouldn't people wait for all the facts?

What might look like a series of individual responses is actually a loosely coordinated action by a closed Facebook group called #ichbinhier (the English equivalent is #iamhere). Yan, an event coordinator from Berlin, is one of those who helped contain the trolls.

"We usually go to the big media sites because they're either unmoderated or, if they are, it's only for 10 or 15 minutes," Yan told Deutsche Welle. "I can understand that. It's not like we work against the media. And sometimes we get nice feedback. I recently got an email from an intern at a major German newspaper who thanked us for helping to deal with hate speech that came in the middle of the night and overwhelmed him." 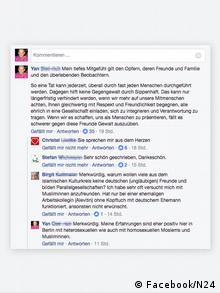 The idea is a bit like a volunteer neighborhood watch for the digital age, with users patrolling the internet to enforce minimum standards of civilized speech on issues that get people hot under the collar. And it originally comes from Sweden.

Hannes Ley, a digital communications expert, founded #ichbinhier in late December, basing it on the Swedish Facebook initiative #jagärhär, which currently has more than 67,000 members. The German version of the initiative has had similar success, attracting almost 30,000 members in well under four months.

The key, says Ley, is that people who used to write comments on the internet alone as individuals now do so as a group. That makes them more confident.

"There's a sense of being part of a team," Ley told DW. "Users say that they now feel capable of expressing their opinions again and feel strong."

"For example in Holland, a journalist filmed two male politicians holding hands in response to an attack on a homosexual couple," Ley recalls. "It elicited the classic homophobic comments. We called upon the community to do something. That attracted a lot of attention, and some of our comments had over 500 likes." 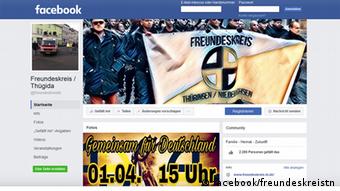 #ichbinhier responses to haters fall into two general categories. Members can simply express contrary views, or they can use fact dossiers on certain issues drawn from sources like the German government's Office for Statistics to argue empirically against irrational points of view. The only thing that's forbidden is trading insults - "Don't feed the trolls" remains a guiding principle.

Traditionally, providing the public with facts was the job of journalists. But Ley says he sees a "negative spiral" of distortion in which media outlets, with their often tight personnel resources, fail to monitor their Facebook platforms, so that hate speech not only becomes more and more dominant, but also more and more radical.

Counterspeech initiatives like #ichbinhier, say experts, are a useful and appropriate tool for news outlets to prevent trolls from monopolizing the discussion. André Kroll, a social-media training instructor and a journalist who works for German public TV, says that there's no shame in calling for emergency help from outside.

"For me it's like a kind of volunteer fire department for social media," Kroll told DW. "If a post - be it about refugees or foreigners or anything else - has gotten out of control, it's perfectly legitimate to invite others to come in and join the discussion. #ichbinhier has demonstrated that it can achieve results."

Perhaps the clearest mark of #ichbinhier's success is that right-wing extremists themselves now complain on Facebook that the group is trying to deprive them of their right to free speech.

And what about Facebook itself? Germany recently introduced legislation requiring social media platforms to combat hate speech. What does the Californian company think of initiatives like #ichbinhier? Would it be willing to help them?

In an email response, a Facebook spokeswoman told DW that Facebook supported a number of counterspeech initiatives, including the company's own Online Civil Courage Initiative (OCCI), which organizes anti-hate speech seminars for NGOs. Ley took part in one of those seminars earlier this year but came away unimpressed.

"I thought it was like a minor advertising campaign for Facebook," Ley said. "As a response to my criticism about the event, I was given a coupon for 100 euros in ad credits. Honestly, that's laughable."

Ley added that his initiative could use technical support and help in campaigning from Facebook.

Toning down the aggression 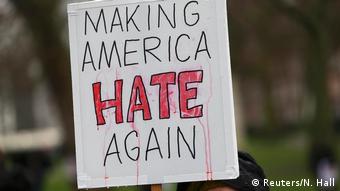 Counterspeech groups are a way of coping with right-wing populism

Leaving aside Facebook's official policies, counterspeech initiatives succeed or fail on the commitment of their members. Yan says he spends at least one and probably two hours a day on #ichbinhier actions. So what motivates people to volunteer significant chunks of their time to trying to talk reason to haters?

Yan says he signed up after wandering around in a state of "shock" following Donald Trump's election as US president. The group, he adds, gave him the sense that he could do something to alter what he felt was the growing irrationality and hatefulness in the world.

He also says that engaging with haters in the virtual universe of the internet has changed the way he behaves and uses language in the real world.

"If someone calls me a 'gay a**hole' on the street, I no longer turn around and say 'f**k you,'" he told DW. "I'll say something like, 'You seem to know quite a lot about homosexuals.' I'll say something that's not at the bottommost level. That's a much better way to react."

#ichbinhier has not only made people like Yan feel empowered. They say it's taught them that there are better ways of asserting one's presence than hurling injurious language at others.

Fake news and hate speech are disseminated via social media on a daily basis. Many profit from this anonymous agitation. But two Austrians have taken it upon themselves to expose fake news and hoaxes. (20.02.2017)

A surprise awaits Germans searching for racist videos on YouTube: pre-roll "ads" that aren't ads at all. They show refugees refuting lies and telling their own story, and they're part of a guerilla-style campaign. (22.04.2016)