Ugandan lawyer Nicholas Opiyo talked to DW about the deteriorating human rights situation in Uganda and the intimidation and harassment he, and other activists, face in their country.

Nicholas Opiyo is a leading human rights lawyer and the founder of the human rights organization, Chapter Four Uganda. He has been working tirelessly since 2005 to promote civil liberties in Uganda, often for free.

Opiyo will be awarded the German Africa prize at a ceremony in the German capital, Berlin, this evening (23.11.2017). The German Africa Foundation gives the prize to honor "outstanding individuals for their long-standing endeavors to foster democracy, peace, human rights, art, culture, the social market economy and social concerns."

Opiyo spoke to DW in Berlin about the dangers of being a human rights activist in Uganda and the questionable democratic practices of Uganda's government. 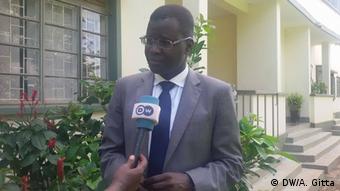 DW: How does it feel to receive the 2017 German Africa award?

Nicholas Opiyo: It is as humbling as it is exciting to receive the 2017 German African prize. I must say it came as a surprise, but I'm elated to receive it. I cannot thank the German African foundation enough for the award.

Do you think that receiving the award is going to help you in your work in Uganda?

I think it is important for our work in Uganda because it provides an opportunity for us to tell the world, especially the German public, about our work; to bring our work to the German people. But more importantly it will provide us with some additional layers of security, because when you receive this kind of award it brings with it publicity and facilitates connections with people. And this makes you safer in an environment such as the one in which I am working in [the Ugandan capital, Kampala].

Why do you need an additional layer of security?

The work of a human rights defender is not an easy job in Kampala. You're coming up against powerful individuals, against state actors. But you are also working in an environment in which there's increasing distrust of any kind of dissent. There's an increasing restriction on free speech. If you are a person who is working to promote these values, you face increasing danger in Kampala. There's a chance of being arrested, a chance of being tried in a court of law and your work being stopped altogether. So this is why I need an additional layer of security — for this kind of environment. 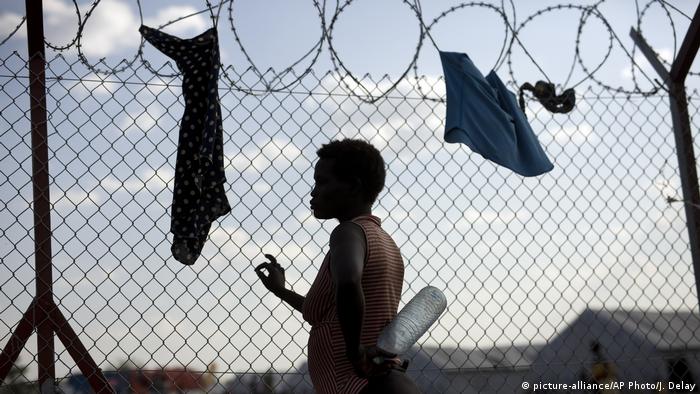 Uganda has taken thousands of refugees from neighboring countries, such as South Sudan

You said there is less room for dissent at the moment. Can you give any examples?

It is very difficult for somebody who is critical of the Ugandan state to operate freely. Many online activists have been persecuted and prosecuted for simply expressing their views online. For example, there is the case of Dr. Stella Anansi, a university professor who criticized the president and his family for reneging on a campaign promise to provide sanitary pads for school girls. She was taken to court. She was being prosecuted for criticizing the president and his family. And there are many other online activists who were taken to court for simply expressing their views. Independent media practitioners are taken to police stations and interrogated for simply being critical of the state. People who dissent are increasingly being injured in Uganda.

How do you see the situation continuing?

I think that the situation in Uganda is only going to deteriorate. It's only going to get worse because the longer President Yoweri Museveni [who has rule Uganda since 1986] stays in power, the more autocratic and intolerant he is becoming.

As the election approaches, there are graver human rights violations. The human rights situation in Uganda, I'm afraid, may not get any better. It will get worse — the longer President Museveni continues to stay in power.

In order to continue holding onto power he uses repression. He uses state agencies to intimidate, to harass and to arrest people who disagree with him.

Do you see any chance that Uganda might reach a point where Zimbabwe is at the moment? Is there a chance that the president could be removed from office against his will?

The situation in Uganda is taking a similar trajectory to that of Zimbabwe, where a president continues to stay in power and use all possible means, including election theft, including intimidation of the political opposition, including the use of a corrupt patronage system.

We've got to the stage where the very last safety valve in our constitution, the age limit contesting the presidency, is now being removed to allow President Museveni to stand for election as long as he wants. The constitution had term limits. Term limits were removed. They are now at the final stages of removing the age limit [which is capped at 75 years, stopping 73-year old Museveni from standing for elections in 2021]]. If we allow the age limit to be removed, President Museveni will no doubt take the same path as Robert Mugabe, as African strongmen, using all possible means to stay in power, including stealing elections.

I don't think we have reached a stage where the president can be removed by the people, because he still has firm control of the army. He has firm control of the coercive state machineries and the Ugandan people are aware of the history of bloodshed. But they also are aware of  our recent history and the willingness of the Ugandan security agencies to fire live ammunition — live bullets at people — who are peacefully demonstrating. So people are aware of that and unlikely to try to remove Museveni from power. Not yet, anyway.

Uganda receives a lot of attention and praise worldwide because of its liberal refugee policy. Do you think foreign governments are also giving enough attention to the domestic situation, the political situation, in Uganda?

For a very long time, President Museveni and the government in Kampala have mastered the use of foreign policy to hoodwink donors and to stop them from asking critical questions about the questionable democratic practices back home.

The first example of this was the use of the 'war against terror' where Uganda deployed forces in Somalia. Nobody was willing to ask tough questions about democratic practices, you know back home.

In the refugee crisis, Uganda has been lauded across the world for its progressive refugee policy — and rightfully so. But I think that the praise results in other countries turning a blind eye to two things: One is the fact that Uganda is as much a cause of the refugee crisis in the region as it is a solution. Our interventions in South Sudan, in DRC, in Rwanda and other African countries have caused the refugee crisis and further deepened the political crisis. For example, Ugandan policies towards South Sudan have forced many South Sudanese to come to Uganda as refugees.

The second thing is that the Ugandan refugee policy is shielding Museveni from critical questions about respect for human rights and respect for the rule of law in Uganda, because he is seen as a regional ally. I think that the international community must begin to look beyond Ugandan policies and focus on the cause of regional issues. Attention should also be given to the regional role of Uganda and the democratic practices within the country. There are serious concerns about the rule of law, the respect for human rights and the respect for free press, for civil society and the respect for people who are critical of the government.

This interview was conducted by Danial Pelz in Berlin.

DW has learned that Ugandan human rights lawyer Nicholas Opiyo has won the 2017 German Africa Prize. He has been honored for his role in protecting peace, democracy, and human rights. (04.05.2017)

Building hydroelectric power plants is complex and often difficult to finance. But not just investors need convincing, the local population does, too. (14.11.2017)