Georgia Democrats Raphael Warnock and Jon Ossoff have been projected as winners in the Senate runoff against Republican incumbents Kelly Loeffler and David Perdue. Democrats will now have a crucial tiebreaking vote. 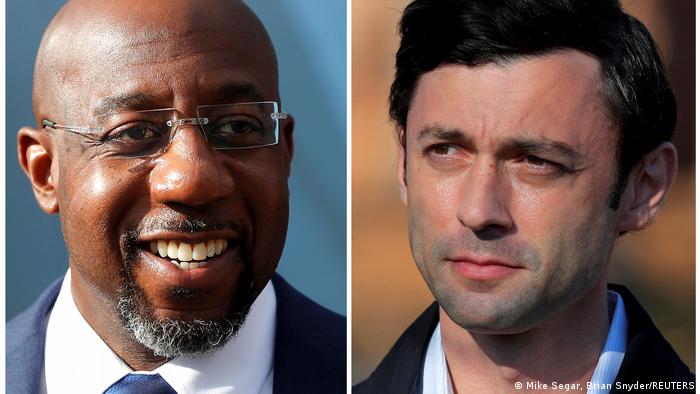 Raphael Warnock (l) is projected to become Georgia's first Black senator, while Jon Ossoff will be the Senate's youngest member

US Democrats have been projected to win both races for two Senate seats in the US state of Georgia on Wednesday.

The results of the neck-and-neck races will determine which party controls the US Senate, having a major impact on the course of Joe Biden's presidency and his ability to pass legislation through the US Congress. Democrats already control the House of Representatives.

"They want action on the crises we face and they want it right now. On COVID-19, on economic relief, on climate, on racial justice, on voting rights and so much more," Biden said in a statement.

The election has drawn an international spotlight on the state following November's tumultuous US presidential election.

Vote counting stopped in many parts of the state overnight with results expected on Wednesday afternoon (local time).

Democrat Jon Ossoff has become the youngest US senator, after he was declared the winner of his race against Perdue, according to Associated Press projections.

Ossoff spoke about his plans to "beat the virus and rush economic relief" to the people of Georgia in the video, which was shared before multiple sources had called the race.

With the win, Warnock has become the first Black senator in his state's history.

He acknowledged his improbable victory in a message to supporters early Wednesday, citing his family's experience with poverty.

"The other day, because this is America, the 82-year-old hands that used to pick somebody else's cotton picked her youngest son to be a United States senator," he said, referring to his mother.

"Tonight, we proved with hope, hard work and the people by our side, anything is possible."

Loeffler refused to concede in a brief message to supporters shortly after midnight.

"We've got some work to do here. This is a game of inches. We're going to win this election," the 50-year-old former businesswoman insisted, despite having no path to victory.

Why is this race important?

Once a solidly Republican state, Georgia in 2020 chose a Democratic presidential candidate for the first time since Bill Clinton in 1992. Biden won the state by a thin margin of just under 12,000 votes.

However, none of the four candidates for the Senate on Election Day in November won more than 50% of the vote for Georgia's two seats, which automatically resulted in a runoff. Since then, both Republicans and Democrats have been pouring millions of dollars into campaigns, as Georgia's seats will determine whether Democrats or Republicans control the Senate.

'This is life-changing' — Georgians head to polls

If Democrats flip both the state's Senate seats currently held by Republicans, it would split the chamber 50-50, giving Vice President-elect Kamala Harris a tiebreaking vote in passing legislation. If Republicans win the second runoff, their party would have a 51-49 advantage in the upper house of US Congress.

As legislative cooperation between Democrats and Republicans has been deadlocked in recent years, Democrat control of the Senate is seen as being critical for the fate of incoming President Joe Biden's agenda.

What have Trump and Biden said?

On Monday, both Trump and Biden held rallies in Georgia to encourage supporters to get out and vote.

"This is it. It's a new year, and tomorrow can be a new day for Atlanta, for Georgia and for America,'' Biden said at a drive-in rally in the state's capital Monday.

Trump held a rally Monday night in rural northern Georgia. The outgoing president called the runoff one of the "most important elections" in US history, while reiterating his unsubstantiated claims that the presidential election was "rigged" and there was "no way" he lost Georgia.

"The stakes in this election could not be higher," Trump told the crowd of several thousand supporters at an air field near the town of Dalton.

The pressure is on for President-elect Biden, with DW correspondent Oliver Sallet noting that the results of the vote in Georgia "could determine the fate of his presidency."

"He wants to undo several policies of the Trump-era if not a majority of them. In order to be able to do that he needs control of both chambers of the US Congress."

It won't be enough for the Democrats to win just one of the open Senate seats in Georgia.

"That could result in a situation where the Republicans could obstruct his policies and make him a weak president in fact from the day he takes office," Sallet said.