Opposition lawmakers are demanding that the prime minister resign after the death of cameraman Alexander Lashkarava. His colleagues have told DW about the circumstances that led to his death. 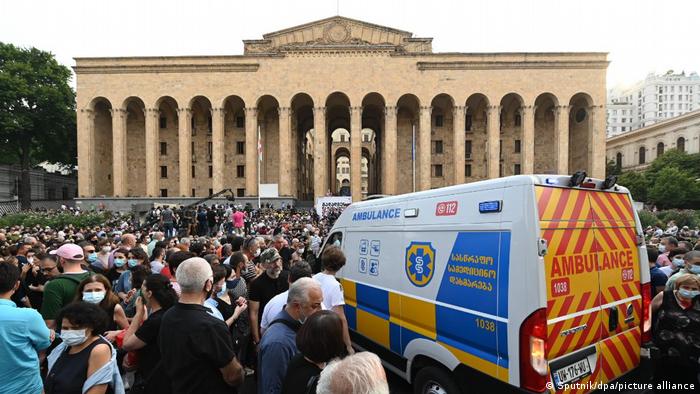 Hundreds of protesters gathered outside the parliament building in Tbilisi

Colleagues of Alexander Lashkarava have said there was no one to protect journalists or the organizers of a Pride march when he was beaten up by a right-wing mob while covering an anti-LGBTQ attack.

The TV Pirveli cameraman was found dead at his home on the weekend, days after being attacked.

"The government is not only avoiding taking responsibility, but they're trying to justify all the violence because there were no law enforcement at the LGBTQ office that day when they knew violent crime would be there," Nana Aburjanidze, Channel Executive of TV Pirveli, told DW.

"So law enforcement should have been there in the first place, right? There was nobody to protect neither our journalists nor the organizers."

The same day Lashkarava was beaten, over 50 other journalists were also attacked by homophobic groups protesting a planned Pride march. The march had to be canceled following violence against LGBTQ communities in Georgia.

Aburjanidze said Lashkarava and another journalist had been filming upstairs in a building where Pride organizers were located when "this violent group entered and started running up the staircase."

"They started assaulting the journalist. And so Alexander Lashkarava took charge saying, hey, don't touch us. But then up to 30 people were beating him up and they beat him to death."

The journalist's death triggered calls for Prime Minister Irakli Garibashvili to step down.

Thousands of protesters marched in Tbilisi for a second straight day on Monday to demand his resignation and the prosecution of those responsible for Lashkarava's death.

Opposition lawmakers disrupted a session in Parliament to call for Garibashvili's resignation. They blamed the ruling Georgian Dream party for attacks on journalists.

Georgian police say they have detained twenty people for violence against journalists and the media.

Multiple WeChat social media accounts belonging to campus LGBTQ groups were pulled from the Chinese social media network. An administrator involved said it happened to all the affected groups at once.