Nine women from the world of football are out to change the German FA. One of them is Jana Bernhard, managing director of the sports sponsors' association S20. She spoke to DW about the initiative's objectives. 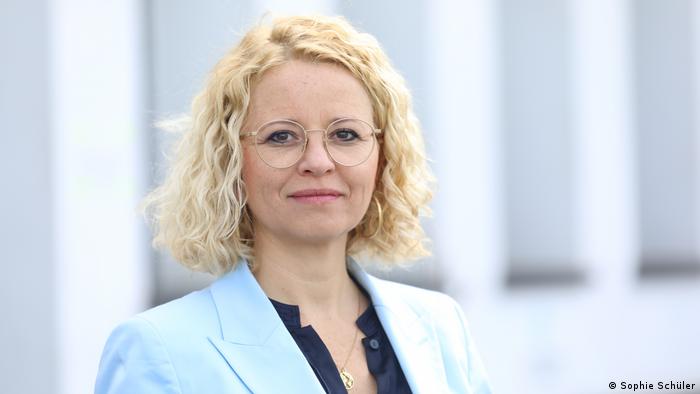 Jana Bernhard is managing director of S20 - The Sponsors' Voice

Nine women, eight key demands, one clear message: Things must not stay the way they are in professional football and gender equality is a must. The women, who are involved in different aspects of football, unveiled their project "Football can do more" this week. The initiators are: Germany goalkeeper Almuth Schult, former Germany goalkeeper Katja Kraus, former Bundesliga player Katharina Kiel, former referee Bibiana Steinhaus-Webb, TV commentator Claudia Neumann and TV presenter Gaby Papenburg, the head of the supervisory board of second-division club St. Pauli, Sandra Schwedler, fan spokeswoman Helen Breit – and Jana Bernhard, the managing director of S20 – The Sponsors' Voice. She spoke to DW about the new organization's goals.

DW: You worked for the German Football League (DFL) for several years, so you also know your way around the German FA (DFB). Is the fact that almost exclusively men are in charge at the DFB a major reason for the problems it's currently facing? Just one of the 18 members of its presidium is a woman. Could such problems have been avoided if women had been better represented?

Jana Bernhard: At the DFL, I had relatively little interaction with the DFB because my area of responsibility was internationalization. So I had more contact with the clubs. But there too, the absence of women is clear for all to see. The approach taken in our position paper is not aimed at the management bodies in the DFB. Rather, it is based on the fundamental demand for change both in the associations (national and regional) and in the clubs. It has been scientifically proven that more diverse teams produce better results. We are convinced that this would also be the case if there were more women at the DFB.

As executive director of the S20 sponsors' association, you represent the business community. Do sponsors have an interest in seeing more diversity in football?

Absolutely! One hundred percent! This was also one of the points we made the national task force on the future of professional football. As the S20, we had a seat at the table there. Much more diverse teams exist in the business world, and they produce better results. The many disputes that currently exist in German football but also elsewhere in German sports, must not be allowed to continue. Sponsors are demanding that good governance structures be created.

A few prominent personalities in women's football that you might think would be involved in your initiative are not; former Germany coach Silvia Neid, DFB presidium member Hannelore Ratzeburg, former Germany coach and player Steffi Jones... Is this because they are too close to the DFB?

I don't necessarily think they're too close. We have also spoken with some of them. But we believe that it is more difficult for someone who is closely connected to the DFB to advocate such positions and then communicate them to the outside world.

What are your initiative's key demands?

We have set out eight specific demands. In very brief terms, we are calling for a mandatory 30% rule for women in the associations and clubs, which we believe can and must be achieved by 2024. We are demanding salary transparency, equal pay for equal work, consistent sanctioning of any form of sexism and gender-appropriate language.

You're calling for a 30% quota of women and are also pushing the idea of electing a female DFB president; the name of former national team goalkeeper Katja Kraus has come up. Is this part of a negotiating tactic, reaching for the stars as a starting position? Or are you saying that real change can only come if a female president is put in charge.

As I said, we're not interested in the DFB's management bodies, but in making fundamental structural changes. We believe that old patterns must be broken so that a there can truly be a fresh start. It must be clear to the association where it is trying to head. Only then should suitable candidates be considered and put into place.

Has the DFB reacted to your initiative?

Yes, it has. In the run-up to the publication of the position paper, we held talks with Fritz Keller and Heike Ullrich from the DFB and with Christian Seiffert from the DFL. The response from both organizations was positive.

Jana Bernhard is managing director of the association of the 20 most prominent sports sponsors in Germany. She is a business economist with a master's degree in sports science. Before Bernhard joined S20, she worked in international marketing for the German Soccer League (DFL).

The interview was conducted by Tobias Oelmaier.