Gaza teen′s tweets tell of everyday survival in a warzone | World | Breaking news and perspectives from around the globe | DW | 13.08.2014

A Palestinian teenager has been propelled to newfound fame by live-tweeting events in the Gaza Strip. Farah Baker says she wants to tell the world the truth about the ongoing fighting between Israel and Hamas. 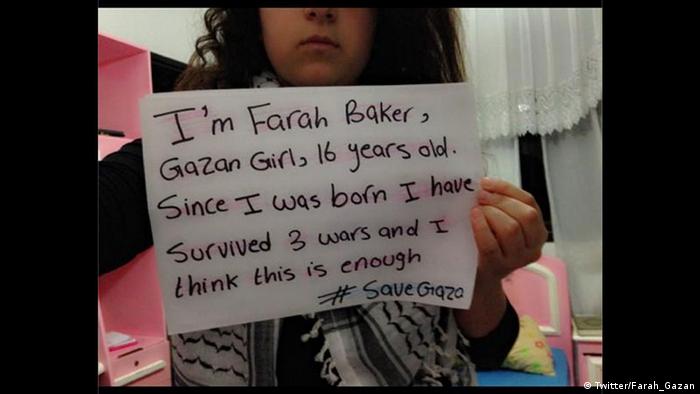 In the midst of a warzone, 16-year-old Farah Baker's weapon is her mobile phone. The teenager, who tweets under the handle @Farah_Gazan has shot to fame with her candid tweets and real-time videos of the current fighting in the Gaza Strip.

Baker says she turned to social media because she wanted to make a difference in an often seemingly futile situation.

"I started tweeting the war because I couldn't stand watching innocent people getting killed, and I can help by showing the world exactly what happens in Gaza," she says.

She says while Western media shows a bias toward Israel, she is also heartened by the sheer amount of coverage they have given to the current unrest in the 360-square-kilometer strip of land.

'I could die at any moment'

The teenager began tweeting and blogging in 2012, and since then has amassed more than 193,000 followers on Twitter. Almost 30,000 of these have been in the last three days alone. Baker, who tweets largely in English, says she is astounded by the sudden surge in her popularity, with most of the recognition coming from the international community.

"I knew that I would become famous a little bit but not this much."

"Many people told me that they didn't know that this was happening in Gaza," she says. "So I am happy because I can show them the truth."

In between videos of flares lighting up Gaza's skies and sometimes graphic pictures of the aftermath of a bomb explosion are the more conventional thoughts typical of a 16-year-old. One photo shows the blue-eyed teen smiling into the camera, showing off her newly straightened hair.

But mundane moments such as these can be quickly forgotten, as on the night of July 29 which Baker describes as her most terrifying moment so far.

"They were bombing in my area and the power was cut off so the only light we could see was flares. The only sounds we could hear were ambulances and people shouting, fire engines, bombs and rockets falling. The bombs were so heavy that I thought I could die at any moment," she says.

Her tweet "This is in my area. I can't stop crying. I might die tonight" was retweeted more than 17,000 times around the world.

With less than eight hours left until an Egypt-brokered temporary ceasefire expires, Baker says she is unsure what will happen next to the place she calls her home. Especially, she says, as she has already heard evidence the fighting has started up again.

"Israel doesn't want us to live in peace," she says. "(But) I think that if Arab countries and many other countries try to help yes, we might reach a solution, why not?"

Negotiators in Cairo are scrambling to strike a deal between Israel and Hamas as the deadline of a 72-hour truce in Gaza looms. Without a deal, both sides could accept an extension or risk the resumption of fighting. (13.08.2014)

A 72-hour truce between Israel and the Islamist militant group Hamas appeared to be holding as it entered its second day. More talks were scheduled aimed at reaching a longer lasting ceasefire. (12.08.2014)

Violence and boycotts in the West Bank

The eruption of violence between Israel and Palestinians has moved so rapidly it has been hard to keep up - from Hebron in the West Bank to East Jerusalem to Gaza. Kate Shuttleworth went back to where it all began. (11.08.2014)