Gavrilo Princip, assassin who sparked WWI, gets statue in Belgrade

Serbia has unveiled a monument to the man who sparked the chain of events leading to World War I. Gavrilo Princip, who assassinated Archduke Franz Ferdinand in 1914 has a divisive legacy in the Balkans. 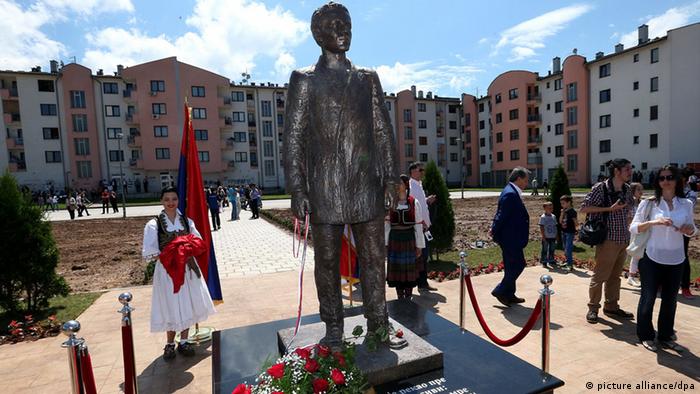 Serbia on Sunday inaugurated a monument to the man whose assassination of Archduke Franz Ferdinand ignited World War I.

Gavrilo Princip, whose two-meter bronze likeness was unveiled before a crowd of hundreds in central Belgrade still fuels controversy in the ethnically-divided Balkans.

Serbian President Tomislav Nikolic described Princip as a freedom fighter and a hero.

"Today, we are not afraid of the truth," Nikolic said. "Gavrilo Princip was a hero, a symbol of the idea of freedom, the assassin of tyrants and the carrier of the European idea of liberation from slavery," Nikolic told the crowd.

To the many outside of Serbia who view Princip as a terrorist, Nikolic said, "others can think what they want."

Princip, a Serbian nationalist opposed to the Austrian-Hungarian empire's occupation of his country, shot dead Ferdinand, heir to the imperial throne, on June 28, 1914 in Sarajevo, precipitating the chain of events that sent Europe tumbling into World War I.

Austria held Serbia responsible for the assassination of the Archduke, and with the support of Germany, Austria attacked Serbia, whose allies, Russia and France, were soon entangled in the conflict. The Ottoman Empire, Britain and later Italy and the United States also joined the fighting.

Princip's legacy has long been a source of controversy in the Balkans, a region still sharply divided along ethnic and religious lines, and which emerged from an ethnically fueled war in the 1990s that followed the breakup of the former Yugoslavia.

Serbs in Bosnia regard Princip as a hero, while the nation's Croats and Muslims widely view him as a killer and nationalist who sought to have Bosnia occupied by Serbia. At the outbreak of World War I, most Muslims and Croats preferred to stay a part of the Austro-Hungarian empire.

Sarajevo last year marked 100 years since the assassination, but Serbian and Bosnian Serb leaders shunned the event on account of Princip's divisive legacy.

Milorad Dodik, a Bosnian Serb leader present at the monument unveiling said that the statue's inauguration amounted to "fighting for freedom today."

World War I would eventually cost some 14 million lives, including 5 million civilians and 9 million military personnel. Princip was arrested immediately after the assassination and died in captivity a few months before the war ended in what is now the Czech Republic.

On June 28, 1914, Serbian nationalist Gavrilo Princip fired the shot that killed Archduke Franz Ferdinand, the heir to the Austro-Hungarian throne. That assassination led to the outbreak of the First World War. (24.06.2014)

Nigeria: Curfew in place after abducted schoolgirls released 2h ago