Serbian leaders have stayed away from Saturday's EU-funded commemorations in Sarajevo to mark the assassination that unleashed World War One. Instead, Serbs have unveiled a monument to the assassin. Vienna's Philharmonic Orchestra performed in Bosnia's capital on Saturday as the world recalls the 1914 killing of Austrian Archduke Franz Ferdinand that triggered World War One, resulting in 10 million battlefield deaths.

Leaders of Bosnian Serbs and Serbia did not visit Sarajevo's newly rebuilt city hall for the concert, seen as the highlight of 1914 commemorations funded by EU nations.

The historic building itself was destroyed by Bosnian Serb forces during the 1992-1995 Bosnian civil war that split Bosnia's Muslims, Serbs and Croats and ended through NATO intervention. 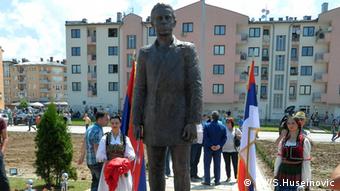 The then 19-year-old Serbian student and Slav nationalist used a pistol to shoot dead Ferdinand, the heir to the Austro-Hungarian throne, and his wife at close range after their motorcade took a wrong turn.

Dodik, the president of the Bosnian Serb half of present-day Bosnia, said the country remained "still divided." He claimed that Princip was a "freedom fighter" and that the then Austro-Hungarian empire had been an "occupier."

Joseph Zimet, the Sarajevo director general of the "Mission du centenaire" - a French-led partnership program managing the WWI commemorations - said it "was a pity" that Serbs from Serbia and Bosnia had "not joined us."

"Sarajevo is now a symbol of a century of wars in Europe but we are here to talk about peace and reconciliation," said Zimet.

Sarajevo Mayor Ivo Komsic said those who refused to come "demonstrated not their attitude toward the past but toward the future of this region."

The Vienna Philharmonic's maestro Franz Welser-Most said the orchestra came to Sarajevo "with a historical burden" and with the intention to "send a clear message: Never again!"

Princip's shots on St. Vitus Day - a Serb holiday of June 28 - prompted Austria to accuse Serbia of masterminding the assassination and to attack Serbia with backing from Germany.

Serbia's allies, Russia and France, were drawn in. Later, Britain, its sprawling Commonwealth empire and the United States also joined the fighting.

When War World One ended in 1918, it had claimed more than 14 million lives, including four million civilian deaths, and left 20 million people injured and maimed.

Many representatives of the former foes marked the centenary on the sidelines of an EU summit on Thursday with a low-key ceremony at Belgium's Ypres, where German forces used mustard gas for the first time in 1915.

World War One fanned the emergence of many of the ideologies that fashioned the 20th century and its conflicts, including Nazism, anti-colonialism, and Communism.

Finnish Prime Minister Sanna Marin says she has never used drugs and took a test as criticism mounts after footage was posted of her at private parties. Online, many people expressed support for Marin.