Gauck: Germany 'can do more' for Syria refugees

President Joachim Gauck has urged Germany's future government to do more to assist refugees fleeing Syria's conflict. He visited the Friedland refugee camp where an initial 5,000 Syrians will be based. 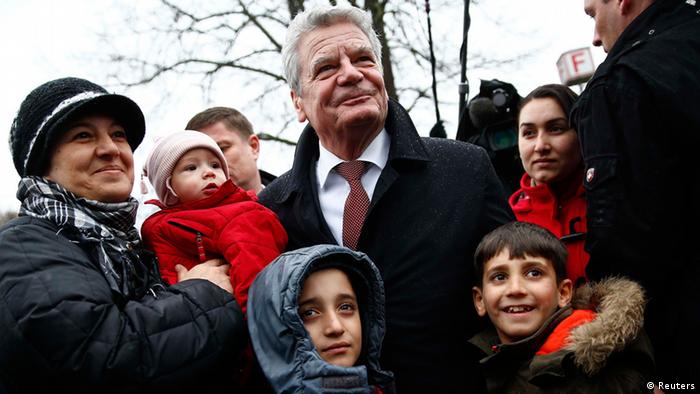 The president called on lawmakers to take in additional Syrian refugees on Thursday, asserting that Germany had the capacity to provide further humanitarian assistance.

"We have not reached the limit of what we can achieve, and I am certain that the new government also sees it that way," Gauck said during a visit to the Friedland transit camp outside the north German city of Göttingen.

"In the face of his humanitarian catastrophe we can do more," he added.

Gauck met more than a dozen refugees who were among the first of 5,000 Syrians offered shelter in Germany earlier this year. Around 520 adults and children have so far arrived in the country, with Friedland, which has served as a refugee camp since the 1950s, designated as an initial stop.

Germany has agreed to accept 5,000 Syrian refugees who will allowed to stay for at least two years. They've been carefully chosen and will be introduced to German life via a two-week crash course. (10.09.2013)

"I question whether the figure, which we have agreed so far, is in fact the right figure," Gauck said. He did not elaborate on any specific number he had in mind.

"We have heard reports of destroyed houses, ruined lives and trauma," Gauck said.

"It is very different when you look into peoples faces, than when you just read statistics," he added.

According to UN estimates more than 120,000 people have died in the nearly three-year conflict. Millions have fled the country, mostly into neighboring Lebanon, Jordan and Turkey.