Newly sworn-in President Adama Barrow has promised a major political shake-up in The Gambia. The West African country is entering a new era after more than two decades under an oppressive regime. 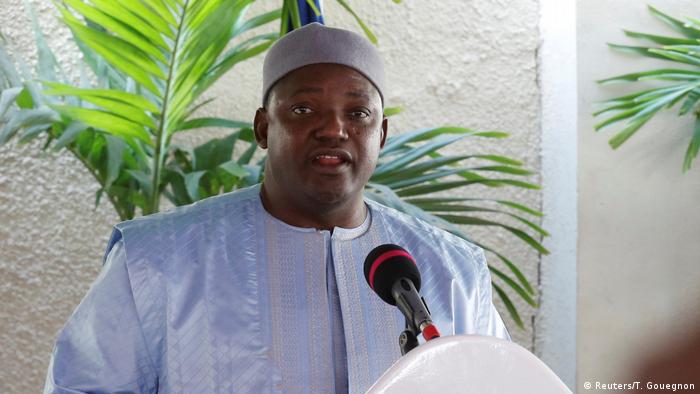 Barrow said on Saturday during his first press conference that his government was planning to overhaul every aspect of government as the country emerges from more than 20 years of rule under former leader Yahya Jammeh.

"The rule of the law, that will be the order of the day," he said.

Among the issues Barrow addressed were the necessity of financial transparency from ministers and the country's status as an "Islamic republic." Responding to the latter point, the new president said The Gambia was a republic, "not the Islamic republic." Civil servants in the country, which is 90 percent Muslim, would likely go back to working a five-day week after Jammeh's rule that Friday was a day off according to Islamic tradition.

Barrow did say, however, that he would retain the country's notorious secret police, the National Intelligence Agency (NIA), though it would be given a different name.

"It's an institution that has to continue, but the name will change," Barrow said. Human rights groups have alleged that the NIA under Jammeh was responsible for interrogation, forced disappearances and torture.

Barrow, who returned to The Gambia from Senegal following a tense standoff between Jammeh and Western African military forces, said he would name his cabinet next week. Jammeh, meanwhile, has been accused of stealing $11 million from state coffers after fleeing to Equatorial Guinea.

My picture of the week | Cheered escape from Gambia

After days of crisis talks and a military incursion, Yahya Jammeh has finally ceded power. Newly elected President Adama Barrow has said the former leader was expected to leave Gambia within hours. (20.01.2017)

Gambian President Adama Barrow wants Senegal to send over 600 troops to his country ahead December elections. This is in addition to the Senegalese forces already there as part of the ECOWAS peace mission deployed in 2017. DW's Jane Nyingi spoke to Omar Wally in Banjul and first wanted to know if the Gambian army is capable of handling its security issues.