Finnish police have reported an abnormally high number of sexual harassment cases in Helsinki on New Year's Eve. Police also said they received a tip about possible problems and increased security ahead of time. 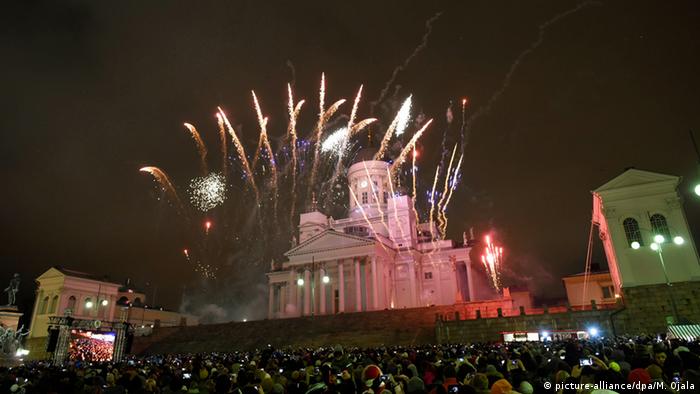 Finnish police reported on Friday that women in its capital city experienced an unusually high level of sexual harassment on New Year's Eve. After receiving tips about asylum-seekers' plans to sexually harass women, police said they greatly increased the number of patrolling officers ahead of the New Year's Eve celebrations.

"They had bad purposes in mind," Helsinki deputy police chief Ilkka Koskimaki told DW, saying those criminal intentions included "sexual abuse, robberies and theft." He said there were multiple attacks on New Year's Eve, including three sexual assaults around the central train station. He added that 15 refugees were taken into custody.

In total, 1,000 Iraqi asylum-seekers gathered at Helsinki's central railway station that night, but Koskimaki pointed out that the majority of the group celebrated joyfully and peacefully. He also denied earlier reports that asylum-seekers in other countries were planning on traveling to Helsinki in order to take part in the attacks, calling these reports "false."

"There hasn't been this kind of harassment on previous New Year's Eves or other occasions for that matter," Koskimaki told news agency AFP. Mirroring German police reactions to the harassment in Cologne, Koskimaki said: "This is a completely new phenomenon in Helsinki."

Although the number of attacks were shockingly high, Koskimaki fears the situation could have been much worse. Thanks to a huge police presence in the capital city - the largest ever during New Year's Eve - further assaults were avoided, he told DW.

"Ahead of New Year's Eve, the police caught wind of information that asylum seekers in the capital region possibly had similar plans to what the men gathered in Cologne's railway station have been reported to have had," said a Finnish police statement.

Despite the similarities between the attacks in Cologne and Helsinki, Koskimaki said: "There is no connection to the events there (in Cologne), but the phenomenon is very similar."

On New Year's Eve in Cologne, some 1,000 men gathered at the city's main square by the train station; many are alleged to have sexually assaulted a number of women passing through. Both city police and the administration have been criticized for their initial response to the assaults.

The police, especially, were criticized for initially reporting New Year's Eve as peaceful, and only announcing the string of assaults on January 2.

Angela Merkel's CDU party will address heightening security and lowering barriers to deporting migrants convicted of crimes at a party meeting. It comes on the back of the attacks on women in Cologne on New Year's Eve. (08.01.2016)