Protesters in Athens have voiced their unhappiness with the government, some confronting the police violently after the march. Some Greek leftists see a possible bailout extension as caving in to the nation's creditors. 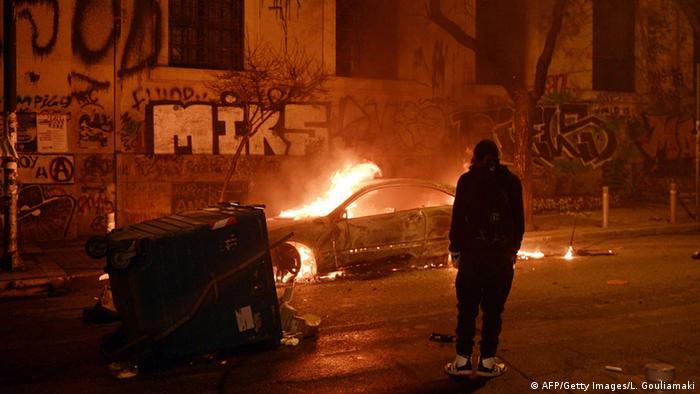 As many as 450 far-left protesters took to the streets of Athens on Thursday in the first public sign of discontent with the government of newly-elected Prime Minister Alexis Tsipras. After the march, about 50 black-clad demonstrators clashed with riot police, smashing store windows, throwing Molotov cocktails and burning cars.

The protesters were voicing a growing cloud of discontent hovering over hard-line Greek leftists, who see the deal struck earlier in the week between Greece's creditors and Tsipras' government for a four-month bailout extension as capitulation, breaking earlier promises to ease the burdens of austerity at any cost.

The dozens that remained after the march not only threw Molotov cocktails but also hurled stones at police in Athens' central Exarchia district, a Bohemian quarter known as a haunt for artists and intellectuals, news agency Reuters reported.

Greece's leftist Syriza part rode to victory last month on a tide of anti-bailout sentiment, as the measures imposed by the country's creditors have created a policy of austerity that has left one in four Greeks out of work. Greece creditors, however, have not wavered in their call for Greece to pay back its debts in full and continue in the course of austerity as promised in the initial bailout negotiations. 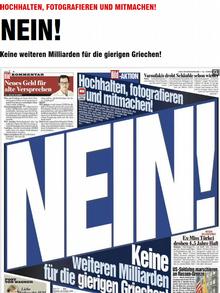 'No!' to more money for Greece, said the Bild newspaper

On Thursday, Germany's ruling coalition held a dry-run of a Friday vote on whether or not to approve the four-month extension tentatively accepted at the beginning of the week. Only 27 of 311 lawmakers from Chancellor Angela Merkel's conservatives rejected it, with junior coalition partners the Social Democrats being unanimously in favor.

After the vote, German Finance Minister Wolfgang Schäuble voiced his "disbelief" at comments made by his Athens counterpart Yanis Varoufakis that discussions should "begin immediately" on the renegotiation Greece's pile of debt. Athens still seeks to have a portion of its debt written off in favor of growth-based bonds.

"I can't see anything Varoufakis is doing that makes life easier for us," Schäuble said on Thursday. The day before, when asked about the possibilty of a third rescue package for Greece, he swore it would not receive "a single euro" more until it meets the pledges of its existing bailout program.

The German media was at odds over the issue, "No more billions for greedy Greeks!" read the headline of the popular Bild newspaper, while a contrary "Yes! Yes! Yes!" came from the leading news website Spiegel Online. 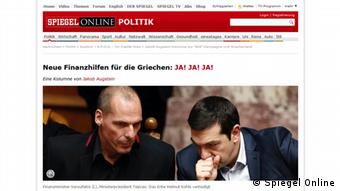 "We need a loud 'Yes' to the euro, to Europe and to the legacy of Helmut Kohl," said the site, referring to the ex-chancellor who was one of the driving forces behind European enlargement and integration after the fall of the Berlin Wall.

Varoufakis: 'Bloodletting' of Greece must stop

As Greece's PM attempts to temper simmering discontent within his party, his German creditors debate whether they can trust Athens to repay its debts. Yanis Varoufakis condemned Greece's treatment as "bloodletting." (26.02.2015)

'Greece's problem is lack of demand, not skills'

Until very recently, Rania Antonopoulos was an economics professor in New York. Now as the new Greek deputy minister of labor, her mission is to figure out how to re-employ Greece's unemployed - and how to pay for it. (25.02.2015)