From hope, a movement: The role of churches in the fall of the GDR

The Churches of East Germany began a peace movement in 1980 that would slowly gain momentum until the nation imploded in the fall of 1989. Their opposition to militarization galvanized others to follow their lead. 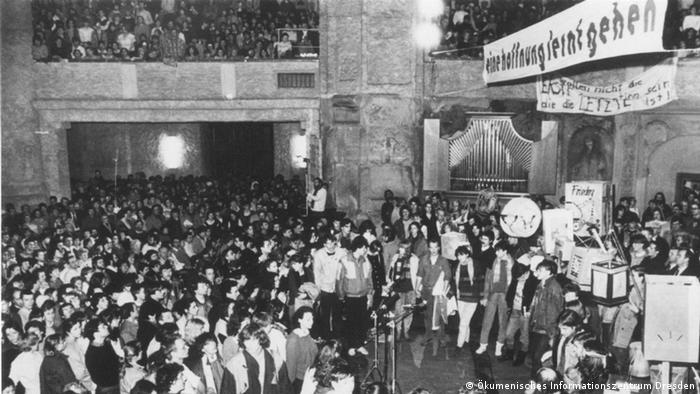 Reformation Day 2014, the Cathedral of St. Nikolai in Greifswald: An artist is forging a sword into a plowshare. His actions call to mind a similar event that took place well over 30 years ago.

Back in 1980, state youth pastor Harald Bretschneider and Provost Heino Falcke were searching for a symbol of the "decade of peace." Their answer lay in the Old Testament. It is the prophet Micah who writes of turning "swords to plowshares," i.e. of making useful tools out of weapons.

Shortly before, the German Democratic Republic had adopted military education classes in all schools. Parents had resisted the presence of war-related toys in kindergartens.

And so, reforming a sword with the strike of a hammer became the hallmark of the Christian peace movement.

The idea was also borrowed from the subject of a sculpture by prominent Soviet artist Yevgeny Vuchetich. It was a gift from atheist Nikita Khrushchev, premier of the USSR, to the United Nations in New York.

"It was wonderful, how this splendid idea of swords to plowshares then multiplied and brought about so many positive effects," Harald Bretschneider reminisces. He had the logo printed on fabric - and to the great annoyance of state authorities, who could not ban it for fear of offending the Soviet Union. Young people in particular wore the round patch, which was sometimes ripped off of their sleeves by angry comrades.

It was also mostly young people who gathered in the ruins of the Dresden Frauenkirche in 1982 to protest war, violence, and creeping militarization. Anne Marie Muller, then a nurse, now director of the "Ecumenical Information Center of Dresden," recalls: "There was a call to women who worked in medical professions. We were to receive draft cards. Some of my girlfriends and I refused them. That was the starting point, when we began working for peace. And we worked for peace continuously – we were really prepared for what exploded in the autumn of 1989." 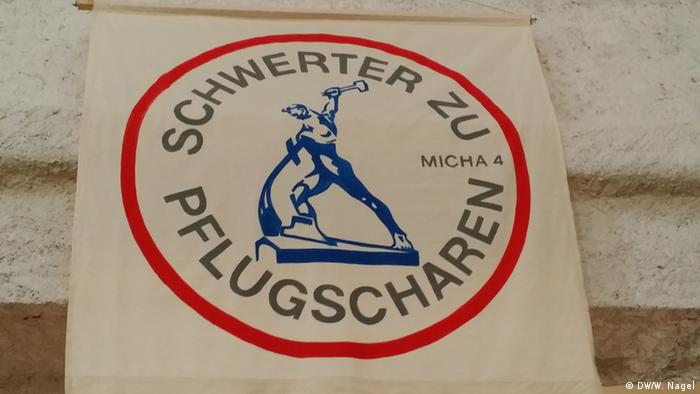 Three years after the initial campaign, at a regional church conference in 1983, Pastor Friedrich Schorlemmer had a sword melted down in the courtyard of Martin Luther's house in Wittenberg in the presence of ZDF television cameras as well as many exultant onlookers.

It was quite a conspiratorial feat, as the church leaders had never allowed such spectacular political messages. "[Stasi chief] Mielke was enraged that his men weren't able to prevent it," recalls Schorlemmer. "The fact that we succeeded, even though so many Stasi officers were in the courtyard, was one of the wonders of autumn '89."

The guidelines for the campaign came from the "Conciliar Process for Justice, Peace and the Integrity of Creation," an international ecumenical movement founded in 1983. It called for a reversal of armament policy - also with regard to the deployment of weapons of mass destruction.

The Christians of the GDR peace movement, says Schorlemmer, wanted Christian-motivated disarmament fueled by the power of nonviolence. They wanted to compete against a force that was going to destroy everything.

"One must not forget, here in Germany, the most dangerous missiles were positioned so closely together [between East and West] that there would have been no advance warning anymore."

At the same time, Christians sat in churches across the GDR and began to pray for reforms. A great number of people were also attempting to leave East Germany, as they saw no future there.

For pastors like the Christian leaders of the Nikolai Church in Leipzig, it was not about pulling the rug out from under socialism. They wanted the country to simply become freer, more environmentally friendly and more democratic.

Finally, the East German state authorities could no longer ignore the Christian peace movement. In 1987, they even allowed the Olof Palme Peace March to take place across the country. Approximately 1,000 people took their banners and marched straight into Dresden Station. 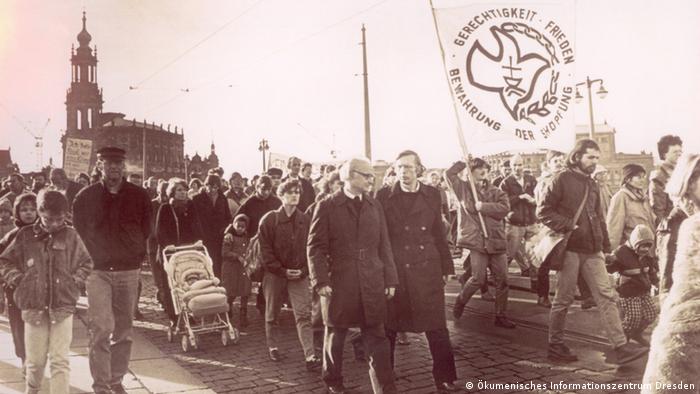 The Olof Palme march for peace in 1987

Meanwhile, it was not only the prophet Micah who encouraged the Christian peace movement. Jesus' Sermon on the Mount also had a far-reaching influence. Former Saxon youth pastor Harald Bretschneider is still amazed at what an impact biblical promises of salvation made at that time.

"Blessed are the pacifists, the peacemakers, for they shall be called sons of God," says Bretschneider, quoting the New Testament. "This means, in faith, nonviolence is always preferable. So you can really say the movement went from a biblical vision to peaceful revolution."

Although the Christian peace movement in the GDR was dominated mainly by Protestant groups for a long time, in 1988 and 1989 the Ecumenical Assembly worked successfully to include all churches. The three sessions in Dresden, Magdeburg and again in Dresden are regarded as the spiritual and mental preparation for the explosive fall of 1989.

"We are staying here - we are the people - Gorby, Gorby," were the chants heard on the streets of Plauen, Dresden, Leipzig, and Berlin in October 1989. The same slogans were shouted everywhere.

But most important was the refrain: "No violence." Many civil rights activists feared that the state would maintain its dominance by force of arms and not shrink from bloodshed - especially after hundreds of peaceful demonstrators were arrested in Berlin and Dresden on October 7.

Christoph Ziemer, then superintendent of Dresden's center district and secretary of the ecumenical assembly, says, "When it comes to bringing about change, one must ask, by what means should you do it? We always knew the answer: By all means but violence."

On October 8, Dresden Mayor Wolfgang Berghofer, together with Saxon Protestant Bishop Johannes Hempel Ziemer, successfully campaigned for peaceful dialogue to defuse the tense situation in the city on the Elbe. At the same time, two Catholic priests made a successful attempt to enter into talks with the police. 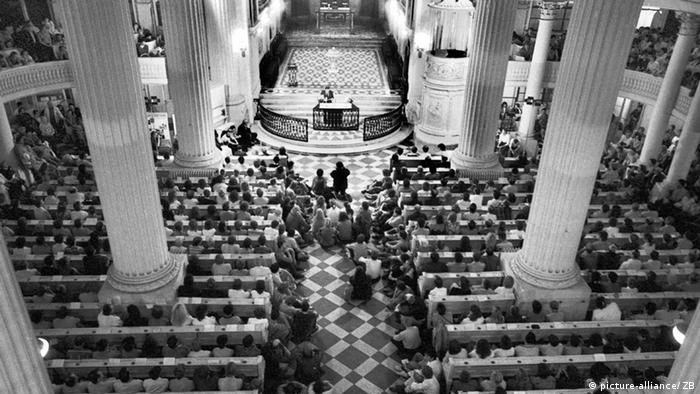 One of these chaplains was Frank Richter, now director of the Center for Political Education in Saxony. He had the courage to approach the police and was able to find an officer who would listen to his suggestions. "Within two hours time, the confrontation turned into a dialogue about seeking a new way," he recalls.

Founded by Richter, the "Group of 20" submitted their requests to the Dresden City Hall. Freedom of expression, press freedom, freedom of travel, release of detainees, approval of the new forum, a civilian alternative to military service - these were liberties that had been demanded all across the country since the great protest on October 9 in Leipzig, which had brought 70,000 people out in the streets.

The churches played an important role in this historical moment as a unique intermediary, the Catholic theologian says: "They provided the space and time for social debates and free speech throughout the process we now call the peaceful revolution."

The churches swiftly lost this role after the fall of the Berlin Wall. From then on, it was no longer the minority of Christians leading the peace movement, but rather the vast majoring of non-church going GDR citizens. And for them, the important issues were reunification and the Deutsche Mark currency.

Documentary highlights marking the 25th anniversary of the Fall of the Berlin Wall: