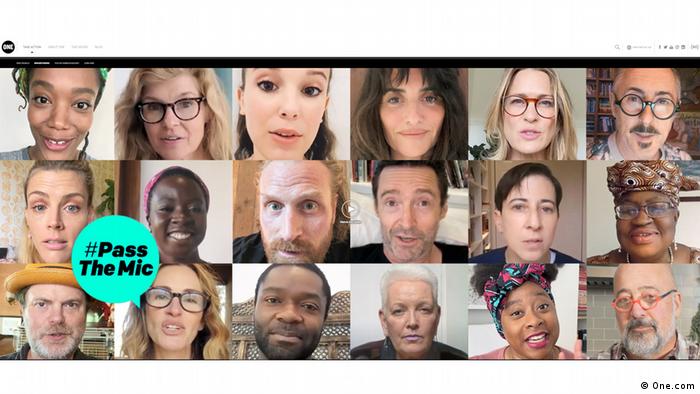 The #PassTheMic initiative launched in May sees A-list celebrities give up their social media channels with millions of followers to leading pandemic experts and frontline workers for a day. Julia Roberts kicked things off on May 21, when she handed over her Instagram account to Dr. Anthony Fauci, director of the US National Institute of Allergy and Infectious Diseases (NIAID) under six US presidents, and interviewed him on YouTube.

Fauci was the scientific face of the Trump administration's coronavirus response, but having cautioned against ending the lockdown, he has been seen much less in recent weeks as the US government seeks to reopen the country. 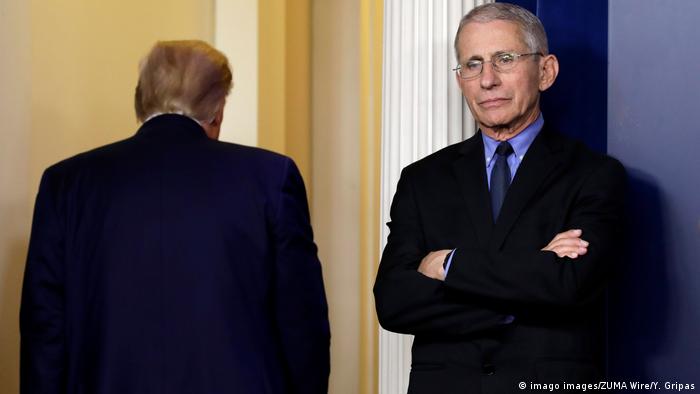 Dr. Fauci with Donald Trump at a press briefing on March 26

Actors Hugh Jackman, Shailene Woodley, Penelope Cruz, Sarah Jessica Parker, Busy Philipps, Danai Gurira and Robin Wright are among the Hollywood names that have committed to #PassTheMic each day and will be handing over their Twitter, Facebook and Instagram accounts to expert guests.

Launched by ONE, a self-described "global movement campaigning to end extreme poverty and preventable disease by 2030," with a particular focus on Africa, the initiative has also featured Ellen Johnson Sirleaf, a Nobel Peace Prize winner and former president of Liberia, who took over actor Hugh Jackman's Instagram account on May 26. She discussed lessons learned from the Ebola epidemic of 2014-16, and the need to improve national healthcare systems.

People who know what they are talking about

The successful coronavirus educational campaign is now also being taken up in Germany and expanded to include the pressing issue of racism. On Monday, dancer Motsi Mabuse will make her Instagram account available to South African lawyer and human rights activist, Melene Rossouw. Mabuse is best known as a regular judge on both the German TV dance show Let's Dance, and the original UK version of the reality format, Strictly Come Dancing.

As global Black Lives Matter protests sparked by the police killing of George Floyd, German-based and South African-born Mabuse has decided to reject the many media requests for interviews, saying "being black is not a trend, it's our life."

"Addressing racism is a subject that has always been part of my life; we are the children of the apartheid era," she wrote in a June 4 Instagram post. "Knowing so many lives have been taken without any consequences by the people who are supposed to protect them … You ask yourself how many more years does mankind need to understand we are all human!"

Mabuse then announced on Instagram that she would take a "time-out" on her social media channels and make them available to social justice lawyer Melene Rossouw.

Rossouw grew up in hardship in an outer district of Cape Town, living with her sister and single mother as"backyard dwellers" at her aunt's house.

While a university education was a distant dream for a black underprivileged child, young Melene wanted to become a lawyer. She was inspired and supported by her mother, who worked in community outreach for abused local women.

Rossouw ultimately graduated from law school and in 2009 was one of the youngest attorneys to be appointed to the Supreme Court of South Africa. She has since founded the Women Lead Movement (WLM), which educates women on their constitutional rights and holding governments to account, and is a ONE spokesperson on gender equality.

"You can influence the way democracy evolved in South Africa," she tells a school class of teenage girls in a ONE documentary. The aim is to teach young women "the value of the vote and how to use their power," and how ultimately to become "a driving force in their democracy."

With WLM, Rossouw regularly writes open letters to international heads of state and governments demanding gender and racial equality. "Genuine equality and justice must be achieved because none of us are equal until all of us are equal," she says.

On Motsi Mabuse's Instagram account, the lawyer will talk both about the consequences of the coronavirus pandemic for human rights in South Africa, and the current struggle for equality in the nation.

When streaming platforms decide to remove "Gone with the Wind" or TV shows like "Little Britain," it's not censorship, says DW's Scott Roxborough. But it opens a larger debate on representation in storytelling. (15.06.2020)