German President Frank-Walter Steinmeier signed a multi-million dollar partnership with Ghana on his first trip to Africa since taking office. Germany hopes the accord might help curb migration to Europe. 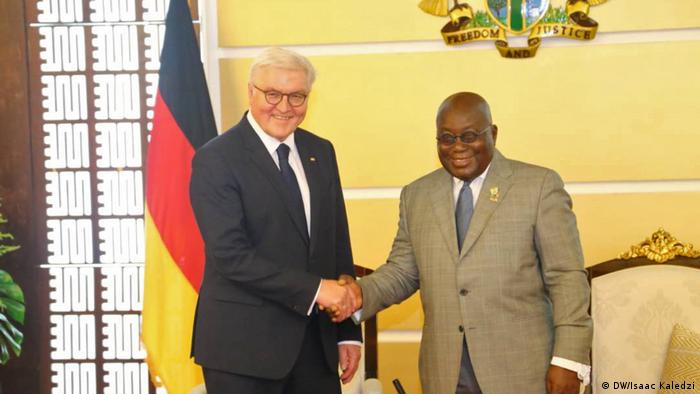 Germany earlier this year signed similar partnerships with the Ivory Coast and Tunisia. "German businesses are happy to go where there is a democracy perspective," the German president said, adding that "Ghana has shown the world over the past 12 months that it is possible to move away from a difficult situation by taking determined action."

The agreement is aimed at attracting private investment, creating jobs in the West African nation and discouraging illegal migration, said Steinmeier, who is on the first leg of a four-day visit to Ghana and The Gambia.

"I am completely convinced that Akufo-Addo is serious about a more investment-friendly environment here in Ghana," Steinmeier said, adding that his visit highlights the strong ties between the two nations. Ghana, he said, has "done well to enhance its business climate and has provided the opportunity for the German companies to invest in Ghana." 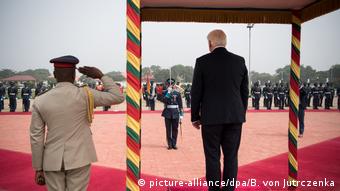 The German President is welcomed with military honors in Accra

Ghana is West Africa's second largest economy after Nigeria. In an interview with Ghana's Daily Graphic newspaper, the German president called Ghana "a shining example in the region."

As one of Germany’s most important trading partners in West Africa, he said, Ghana can "send a signal of encouragement and motivation to set out for new shores that will be heard far beyond the borders of your country."

"We want to help Ghana succeed in offering better opportunities to its young citizens than embarking on the extremely dangerous option of illegal migration," the German President told the Daily Graphic, adding that it was the mutual obligation of European and African nations to warn people of the great dangers of the migratory journey towards Europe.

Pointing out that Germany grants asylum to people fleeing political persecution and conflict, but not to economic migrants, he argued that the partners must "fight together against criminal trafficking networks." He also stressed the importance of coming up with ways of increasing the number of skilled jobs in Ghana to give citizens reasons to stay in the country.

Relations between Ghana and Germany go back more than 60 years, with Germany increasingly evolving as one of Ghana's biggest development partners.

"We are taking great deal of inspiration from the commitment of German leaders in supporting the options the Ghanaian people have taken to assume greater responsibility for their economic development," said Ghana's president, who praised the "fruitful dialogue."

On Wednesday in Accra, German President Steinmeier is scheduled to open a migration advisory center aimed at training young Ghanaians and supporting business start-ups before continuing on to the Republic of The Gambia.

Thousands of African migrants trying to get to Europe end up trapped in Libya. Often they endure abuse, and some are even sold into slavery. DW's Migration Dilemma series looks at why people risk the journey. (02.12.2017)