A year after winning over 66 percent of French voters, Macron's support has fallen to just 29 percent, according to a new poll. The president's policies are now seen by some as favoring big business and the rich. 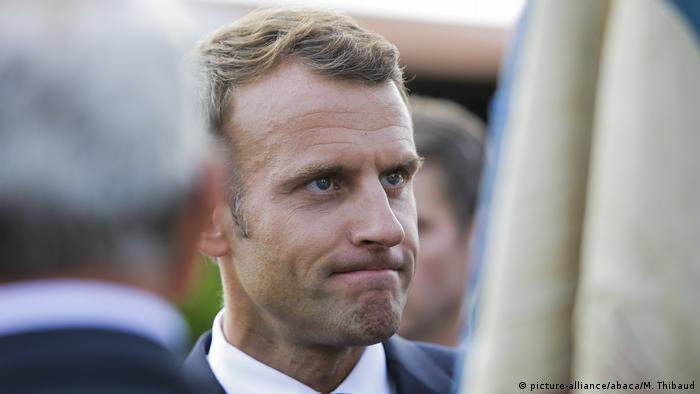 French President Emmanuel Macron's popularity has hit its lowest level since the start of his term, a major tracker poll published on Sunday showed.

Just 29 percent of respondents said they were satisfied with his leadership, according data from research group Ifop, published in the Journal du Dimanche newspaper.

The Ifop poll showed a fall from 34 percent support last month and 39 percent two months ago.

Read more: French President Emmanuel Macron: Is the honeymoon over?

The result follows several scandals to shake the 40-year-old centrist's administration, including Macron's slow response to accusations that his private bodyguard assaulted May Day protesters, and his sometimes patronizing tone with voters.

The president was criticized last week for telling an unemployed man he could easily get a job if he tried.

His leadership was also damaged by the surprise resignation of his environment minister, Nicolas Hulot, earlier this month, along with a vow by interior minister Gerard Collomb, one of Macron's closest allies, to run for election as mayor of Lyon in 2020.

The former investment banker won the 2017 election with 66.1 percent of the vote on a reformist project to modernize the eurozone's second strongest power. He was quickly hailed as France's golden boy — a welcome change from his stuffy predecessor Francois Hollande.

But many Macron supporters have been quick to criticize his lack of action on the French economy, as there's been no major uptick in growth or significant fall in unemployment.

Some French voters, from conservative pensioners to low-income workers, now see his administration as favoring big business and the rich.

On Monday, his government will unveil its draft budget, which will again attempt to rein in France's chronic overspending via cuts to the public sector payroll and caps on pensions.

French President Emmanuel Macron stuck to his guns after his rivals slammed his description of the French as "Gauls who resist change." Expressing "humor about oneself" is a typically French characteristic, he quipped. (30.08.2018)

France's Emmanuel Macron has drawn fresh criticism for telling an aspiring gardener he could easily find work in hospitality or construction. "I can find a job by crossing the road," Macron told the young jobseeker. (16.09.2018)

French Sports Minister Laura Flessel has announced that she is stepping down. Her resignation comes just a week after President Emmanuel Macron's environment minister quit his post during a fiery live radio interview. (04.09.2018)