France's Emmanuel Macron has drawn fresh criticism for telling an aspiring gardener he could easily find work in hospitality or construction. "I can find a job by crossing the road," Macron told the young jobseeker. 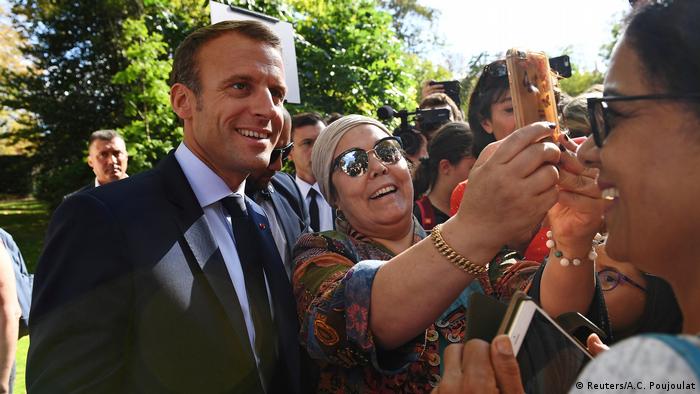 France's Emmanuel Macron was again accused on Sunday for being a "president of the rich" after a video emerged of him talking to a young jobseeker during an open house at the Elysee Palace.

The French President was filmed telling an aspiring gardener that he would easily find work if he simply started looking in high-demand industries, like hospitality and construction.

"I'm 25 years old, I send resumes and cover letters, they don't lead to anything," the man told Macron during Saturday's open house, part of the country's Heritage Days.

The president responded: "If you're willing and motivated, in hotels, cafes and restaurants, construction, there's not a single place I go where they don't say they're looking for people. Not one — it's true!"

Macron went on to suggest that young gardener go to Paris' Montparnasse district, an area brimming with cafés and restaurants, assuring him he would easily find work. "If I crossed the street I'd find you one," Macron said.

After the exchange made the rounds on social media, critics were quick to deride the president, a former investment banker, for being out of touch with ordinary citizens.

'President for the rich'

Meanwhile, one Twitter user described Macron as "completely disconnected from the reality of the French," while another asked, "How can someone show that much contempt, lack of empathy and ignorance in just 30 seconds?"

However, Christophe Castaner, the head of Macron's Republic En Marche! ("Republic on the Move!") party, hit back at accusations the president was indifferent towards the challenges facing the unemployed.

"Is what the president said false? If you go to the Montparnasse area, you won't find that they need workers?" Castaner told French broadcaster RTL on Sunday.

"You would prefer empty words?" he continued. "I prefer a president who says the truth."

According to industry experts, France's hospitality industry has some 100,000 hotel and restaurant jobs that need filling. Officials have asked the government to regularize more illegal immigrants to help cover the shortfall.

It is not the first time that Macron has come under fire for dismissing people's concerns as he attempts to push through economic reforms. He once described opponents of his reforms as "slackers" and accused protesting union groups of "stirring up trouble" instead of finding new jobs.

French President Emmanuel Macron stuck to his guns after his rivals slammed his description of the French as "Gauls who resist change." Expressing "humor about oneself" is a typically French characteristic, he quipped. (30.08.2018)