The French presidency has announced that President Emmanuel Macron has tested positive for coronavirus. He will self-isolate for seven days and cancel all upcoming trips, including a planned visit to Lebanon. 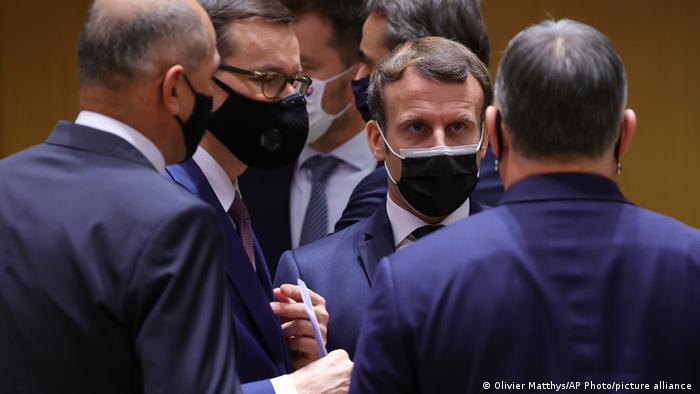 "The President of the Republic has been diagnosed positive for COVID-19 today," a statement said. The diagnosis was made following a PCR test performed after he showed initial symptoms, though his symptoms were not listed.

Macron will self-isolate for seven days, according to the statement, but will "continue to work and take care of his activities at a distance."

In light of the diagnosis, Macron has canceled all of his upcoming trips, including a scheduled visit to Lebanon.

His office is also currently in the process of identifying those people with whom he may have been in contact. Macron attended a European Council heads of state meeting on December 10 and 11, where EU leaders met in person for the first time since October.

At the summit, Macron also met with German Chancellor Angela Merkel, who tested negative for COVID-19 after the meeting. "The chancellor was tested a few days after the EU summit, as is routine," a spokeswoman said. "The chancellor sends the French president her best wishes for a speedy recovery."

On Tuesday, Macron also had lunch with the heads of political groups at the National Assembly, France's lower house of parliament. Macron and his wife Brigitte also hosted a private dinner with Egyptian President Abdel Fattah al-Sisi, during which he awarded him the Grand Cross of the Legion of Honor.

Quarantine for other politicians

Prime Minister Jean Castex will also self-isolate after coming into contact with Macron. Castex has not shown symptoms, but will no longer be going to the French Senate on Thursday to outline the government's vaccine strategy to combat the virus, his office said in a statement.

Brigitte, 67, has also entered quarantine but is showing no symptoms. Spanish Prime Minister Pedro Sanchez has said he will self-isolate until December 24. He met with Macron on Monday of this week.

Meanwhile, Portugal's Prime Minister Antonio Costa said he will self-isolate and canceled all of his official trips, after meeting with Macron.

Costa's office said he displayed no symptoms and was awaiting the result of a coronavirus test.

"The prime minister decided to cancel the trip, as well as any public agenda that implies his physical presence," the statement said. "He will keep all executive activities and work schedule, which will be carried out remotely."

Images from Wednesday showed Macron welcoming Costa to the Elysee Palace, with both leaders wearing masks and standing shoulder to shoulder outside the building's entrance. The president of the European Council, Charles Michel, also decided to self-isolate out of precaution.

European Commission President Ursula von der Leyen, however, said she will not quarantine after meeting with Macron earlier in the week.

Macron's positive test was announced just two days after France relaxed measures to curb a second wave of the virus, replacing a nationwide lockdown with a curfew.

France has recorded over 2.4 million cases and 59,000 deaths since the start of the pandemic.

Valery Giscard d'Estaing was France's president from 1974 to 1981 and had been recently been hospitalized due to heart problems. He was a believer in deeper European integration, describing Brexit as a "a backward step."