Valery Giscard d'Estaing was France's president from 1974 to 1981 and had been recently been hospitalized due to heart problems. He was a believer in deeper European integration, describing Brexit as a "a backward step."

Giscard d'Estaing, who led France from 1974 to 1981, died "surrounded by his family" at his estate, the Agence France-Presse news agency reported. He had recently been admitted to hospital with heart problems.

"His death has plunged the French nation into mourning," Macron said, describing Giscard d'Estaing as "a servant of the state, a politician of progress and freedom."

"Valery Giscard d'Estaing will remain the president who modernized France," said former President Francois Hollande in a statement posted to Twitter. "Today, our country has lost a statesman who chose to open up to the world."

A center-right, pro-Europe politician, his seven years in power was marked by a liberalization of laws on divorce, abortion and contraception.

As part of Giscard d'Estaing's efforts modernize French society, he lowered the voting age from 21 to 18, and introduced legislation on equal pay and opportunities for women.

But the former president made headlines earlier this year when a German reporter accused him of groping her during a 2018 interview.

He also vocally opposed the death penalty but did little to abolish it while in office.

Giscard d'Estaing refused to commute the three death sentences passed during his time at the Elysee, and the last use of the guillotine in France took place during his presidency in 1977.

Giscard d'Estaing also campaigned for deeper European integration, and once described the UK's decision to leave the EU as "a backward step."

He worked together with former German Chancellor Helmut Schmidt for a close Franco-German friendship. Together, they laid the foundation for the common European currency, the euro. 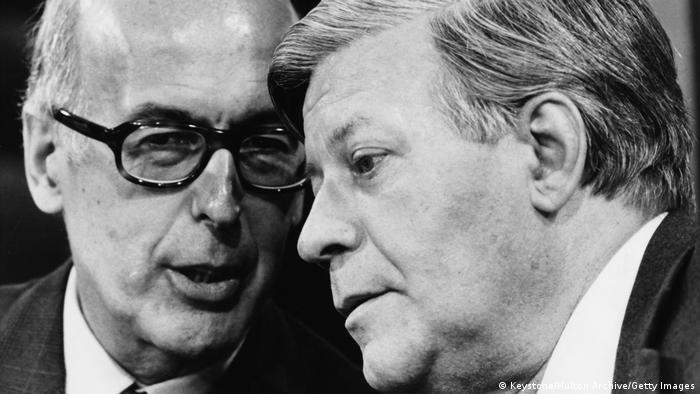 He also helped pave the way for the creation of the G7 summits, a meeting of the seven most powerful economies in the world. It was on his initiative that leaders first met in 1974 as the G5 after the global oil crisis the previous year.

Read more: Opinion: Helmut Schmidt – A man of the world

But it was his commitment to the European project that saw one of successors, Jacques Chirac, ask Giscard d'Estaing to help draft an EU constitution in 2002.

The idea was to deepen ties between the bloc's member states and give the EU a greater voice on the world stage. To his embarrassment, French voters rejected it by 55% to 45% in May 2005.

Giscard d'Estaing placed the blame squarely on the European political class, who he said had failed to explain the benefits of a stronger EU.

"The present generation of leaders, whatever their strengths, never put Europe at the top of their agenda," he told the New York Times in July of that year.

A life in politics

Valery Marie Rene Georges Giscard d'Estaing was born on February 2, 1926 in Koblenz, in what was then French-occupied Germany.

His father was a civil servant who worked for the French occupying forces, while his mother was descended from King Louis XV of France via one of his mistresses.

Giscard d'Estaing joined a French resistance group in occupied Paris as a teenager before enlisting in a tank battalion in 1944, earning the Croix de Guerre in the last months of the war.

A graduate of France's elite ENA school, he entered politics in 1956 when he won a seat in the National Assembly.

Giscard d'Estaing held a number of key posts during Charles de Gaulle's presidency from 1959 to 1969.

He threw his hat into the ring for France's top job at the age of 48 in 1974, after the sudden death of Georges Pompidou.

But Giscard d'Estaing only managed one term, which at that time lasted for seven years, losing his reelection bid to socialist Francois Mitterrand.

US state capitals brace for pro-Trump demonstrations 3h ago

Alexei Navalny detained after landing in Moscow 5h ago