Multiple polls suggest Macron's party may win an absolute majority in the parliamentary election. An investigation into his Modem party ally over alleged misuse of public funds has just been announced. 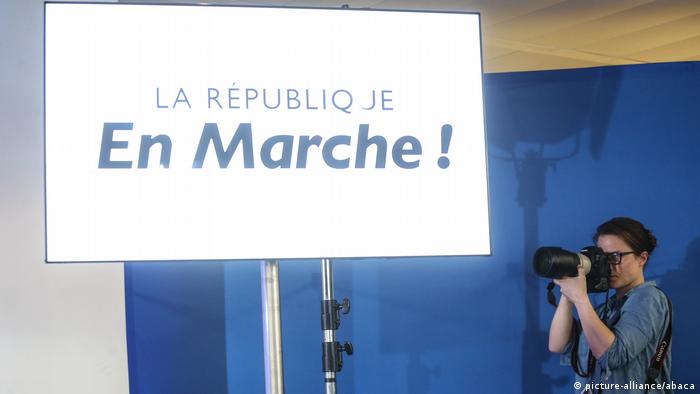 French president-elect Emmanuel Macron has attended his first functions after a resounding win. Macron has spoken with German Chancellor Angela Merkel, telling her that he would travel to Berlin 'very quickly.' (07.05.2017)

A sizeable parliamentary majority remains likely for President Emmanuel Macron, according to a new survey. Already, his centrist LREM party is leading in 10 out of 11 constituencies among French voters abroad. (06.06.2017)

Investigation into France's candidate Fillon broadened to include luxury gifts

Francois Fillon is now being investigated over a gift he received from a high-end tailor. The latest scandal came as his rival Emmanuel Macron met with German Chancellor Angela Merkel. (16.03.2017)

Polls suggest French President Emmanuel Macron's Republic En Marche! party is in a strong position to win the majority of seats in the upcoming parliamentary elections.

The Opinionway poll shows En Marche! winning 30 percent of the vote in the first round, Republicans winning 21 percent, Front National getting 18 percent and far-left France Unbowed will receive 12 percent. In the second round of the election, Opinionway projected En Marche would win between 370 and 400 seats out of 577 in the lower house of parliament. In order to have an absolute majority, a party must earn 289 seats.

On Friday, the Paris prosecutor announced an investigation into Macron's alliance partner, the centrist Modem party, over allegations of misuse of public funds. The prosecutor's office said the preliminary investigation followed a letter received from a former Modem employee who said he was paid seven years ago in part with parliamentary funds for work he carried out for the party.

While the president's new party was heading the polls, there were concerns about the level of turnout on Sunday, according to an Elabe opinion poll published on Friday. All the parties consulted indicated a dropping off in the number of supporters intending to vote in the first round. Only 49 percent of all respondents said they were "absolutely certain" to go and vote on Sunday.

A Harris interactive poll that was released on Thursday said En Marche! would get 360 to 390 seats, while its allies would receive between 125 and 140 seats. The socialists, who currently hold an absolute majority, would drop to between 20 to 30 seats and France Unbowed would have 15 to 25 seats.

The first round of the election takes place on Sunday. Any candidate who receives less than 12.5 percent of the vote on Sunday is eliminated from the second round of voting on the following Sunday.

Should En Marche! earn at least 420 seats, it would better the best result of Charles de Gaulle's Union for the Defense of the Republic-Independent Republicans (UDR-IR), which won just under 73 percent of the seats in the lower house of parliament in 1968.