The French finance and interior ministers will face senators this week, as the government grapples with the chaos and disorder of the recent "yellow vest" protest. President Emmanuel Macron has vowed a strong response. 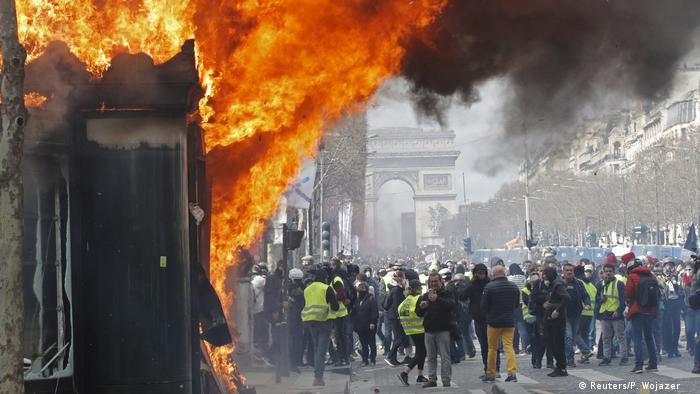 France's government faced harsh criticism on Sunday, in the aftermath of an arson and looting rampage perpetrated by demonstrators during a "yellow vest" protest in Paris the day before.

Prime Minister Edouard Philippe acknowledged the existence of security "flaws," which he said the government would work to rectify.

Retailers said that some 80 shops and businesses were affected. Authorities responded with tear gas, stun grenades and water cannon, in an attempt to repel protesters.

"Analysis of yesterday's events highlights that the measures taken were insufficient to contain the violence and prevent wrongdoing," Philippe said.

French President Emmanuel Macron cut short a skiing trip to return to Paris, where he vowed "strong" action in response to the disturbances in the capital.

Figures from across the political spectrum blamed Macron's government for not being able to control the situation. Paris' socialist mayor, Anne Hidalgo, said on Sunday that she was waiting for "an explanation" from the government, adding that she was "really angry" at the "unprecedented violence".

"We should be able to master a situation like the one we have just witnessed," she told Le Parisien newspaper.

Finance Minister Bruno Le Maire is set to host a meeting on Monday with trade groups, business groups and insurers, to discuss the economic impact of the protests, his office said.

On Tuesday, the finance minister will face questioning from two French Senate committees over Saturday's events. Interior Minister Christophe Castaner will also have to attend hearings in the Senate over the protests.

The hearings are meant to discuss "the means put in place to deal with these disorders." Lawmakers noted the resulting downgrade in France's trading situation and "economic attractiveness," as a consequence of the disruptions on the street, the Senate said in a statement Sunday.