Yellow vest protesters have set fire to stores and clashed with police in a return to violence on the streets of Paris. Organizers are trying to give new momentum to their movement, after weeks of dwindling numbers. 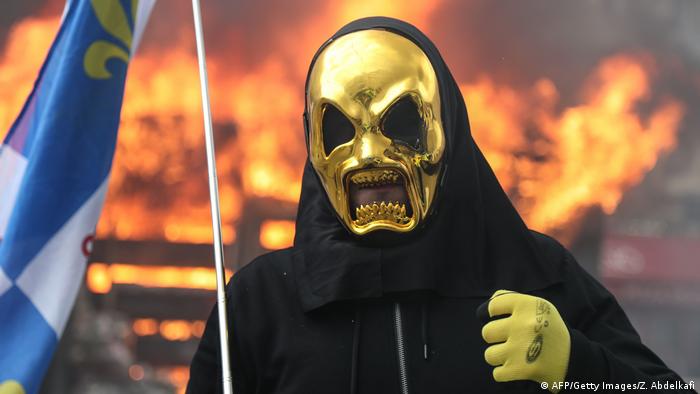 Hooded demonstrators in Paris fought with police and set several stores alight on Saturday, as yellow vest organizers sought to breathe new life into a movement that has rocked the administration of French President Emmanuel Macron.

Police said 42 protesters, 17 of their own officers and one firefighter were injured during a day of violence that followed weeks of relative calm. Nearly 240 protesters were arrested, out of an estimated 10,000 participants.

On the Champs Elysees, rioters set fire to a bank, an upmarket handbag store and two newsstands. The high-end Fouquet's restaurant was also damaged.

Macron returned to Paris on Saturday night for a crisis meeting with ministers.

"We are attached to constitutional rights, but we've got people who through all means quite simply want to make a wreck of the republic, to break things and destroy, running the risk of getting people killed," he said.

"I want us to very precisely analyze things and as quickly as possible take strong, complementary decisions so this doesn't happen again," he said.

Protesters also looted stores and burned bonfires at several points on the famed shopping street, where a large security cordon had been set up to protect the Arc de Triomphe war memorial.

Demonstrators attacked a police van before officers wearing riot gear moved in to push them away. Police fired tear gas and aimed a water cannon on the protesters, who had set barricades alight from a side street.

The avenue, known for its theaters, cafes and luxury shops, was the site of violent protests in previous yellow vest demonstrations.

Prime Minister Edouard Philippe has denounced Saturday's violence and vowed to bring the perpetrators to justice.

"We are dealing with several hundred, several thousand in some cases, highly determined people who are there to create disorder," he said.

The aims of the protesters, who include members of both the far right and far left, are varied. However, chief among their concerns are high taxes and declining incomes.

Critics of the government claim Macron favors the rich and alienates those who are struggling. Macron's popularity rating has fallen sharply since his election in 2017, although it has improved in recent weeks — to some 28 percent.

The demonstrations come at the end of a two-month national debate that Macron organized in response to protests that began in November.

Up to half a million people took part in meetings held across the country to discuss topics including tax, services, unemployment and the environment.

The yellow vest protests appeared to diminish in recent weeks, with some 28,600 protesters counted nationally at last week's demonstrations, and 3,000 in Paris — a far cry from previous figures. When the protests began, some 300,000 people were involved in a day of action to block roads.

The protests started in response to a fuel tax increase, as part of Macron's push for a cleaner energy policy. Macron subsequently dropped the policy and promised more than €10 billion ($11 billion) to boost the incomes of pensioners and France's poorest workers.