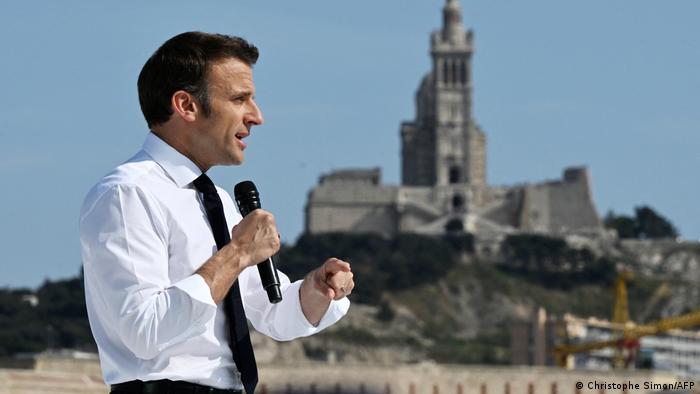 French voters are more likely to support incumbent President Emmanuel Macron than challenger Marine Le Pen in the second round of the presidential vote next weekend, according to a new poll published on Saturday.

An Ipsos-Sopra Steria survey found that Macron enjoys support of around 55.5% of the respondents. Marine Le Pen could count on 44.5% of the vote, with the voter turnout expected to be 72% in the runoff. The French researchers put the margin of error between 0.7 and 2.4 percentage points.

Marine Le Pen "honored" to qualify for second round in elections

With the campaign entering its final stretch, President Macron took pains to emphasize that "nothing is decided" in his battle against Le Pen and urged the voters to go to the polls.

"The far-right represents a danger for our country," he told supporters at a rally in Marseille on Saturday. "Don't heckle them! Beat them!"

Le Pen also reached out to voters on Saturday by visiting an antiques market in the northwestern village of Saint-Remy-sur-Avre. The 52-year-old vowed to rule France "like a mother, with common sense" and defend vulnerable groups. 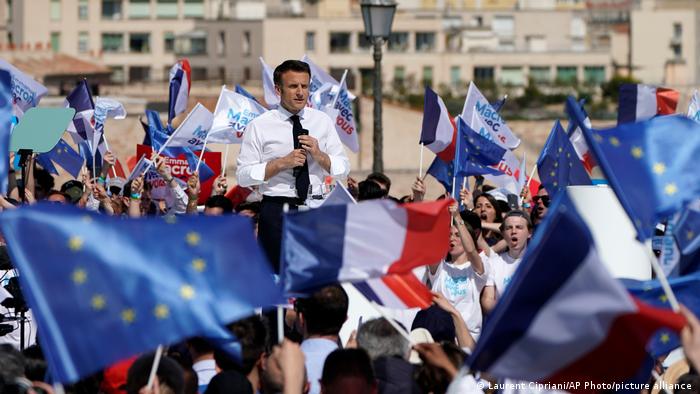 In the first round of the presidential vote last weekend, Macron secured 27.6% of the vote ahead of Le Pen's 23.4%. Hard-left candidate Jean-Luc Melenchon was not far behind, securing 22.2% votes overall and leading the field among voters between 18 and 34 years of age, ahead of Le Pen.

Visiting Melenchon's stronghold city, Marseille, Macron seemed to appeal to younger voters by focusing on climate change, framing the crisis as the "battle of the century" and the upcoming vote as a "referendum for or against ecology."

His remarks come after Le Pen pledged to end subsidies for wind and solar power and also said she would close wind farms, which she described as "horrors that cost us a fortune."

Macron also said his next prime minister would be in charge of "ecological planning" to ensure France is carbon neutral by 2050.

While Macron was speaking in Marseille, the Extinction Rebellion was staging a protest in Paris, blocking key roads to draw attention to what they see as "inaction" of French leaders.

Socialists less than thrilled, but back Macron

According to the Ipsos-Sopra Steria poll, over half of Melenchon's voters still don't have a preferred candidate in the runoff. Those who do are more likely to vote for Macron (33%) than Le Pen (16%), says the poll ordered by France Info radio and Le Parisien daily.

Macron has already secured backing of his predecessors — center-right Nicolas Sarkozy and Socialist Francois Hollande. But Macron's centrist, pro-business position is a hard sell among the socialists.

On Friday,  the party publicly declared their stance with a slogan: "We all want to say 'merde' but we have to vote Macron."

Macron is also likely to gain support from leftist activists who view populist Le Pen as a danger to democracy and liberalism.

Thousands of protesters marched across the country on Saturday against Le Pen, including in Paris, where one banner read: "Against the far-right. For justice and equality, not Le Pen at the Elysee."

"I say to all these people just go and vote. It's as simple as that." 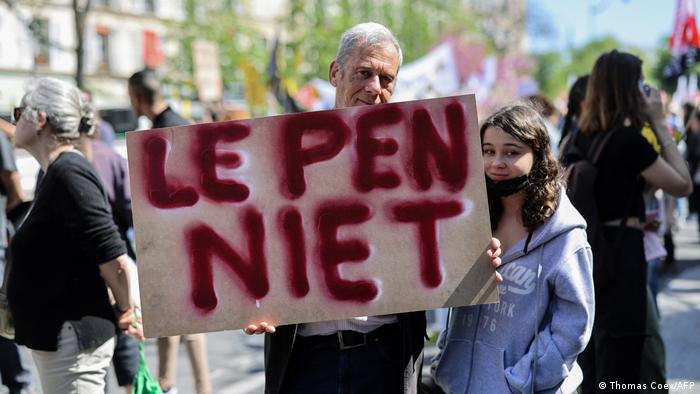 On Friday, both politicians were quizzed on their stance on Islamic headscarves, with Le Pen wanting to introduce fines for women wearing head coverings in public, while Macron defended existing bans that already in force in schools.

The two politicians have already faced off in the 2017 runoff poll, with Macron winning nearly two-thirds of the vote. The landslide victory put Macron, then 39 years old, in the Elysee Palace as they youngest president in the history of the French republic.

But the former investment banker has gained a reputation of being a "president of the rich" during his five years in office. This has proven hard to shake during the campaign amid economic insecurity and rising fuel prices. 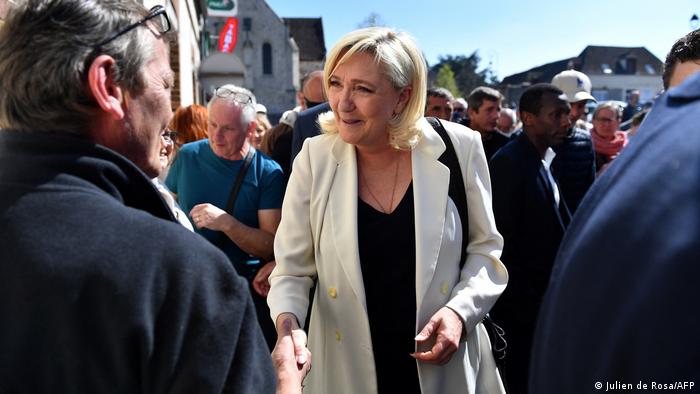 Meanwhile, Le Pen has worked to moderate her more extreme stances. The far-right leader no longer wants France to leave the EU outright, although still wants to free France of "the Brussels straitjacket" and reform the EU from the inside. Le Pen also modified her position on Russia — in contrast to her visit to Moscow and meeting with Vladimir Putin ahead of the 2017 vote, the French politician has recently condemned Russia's attack on Ukraine.

At the same time, however, Le Pen expressed reservations about sending weapons to Ukraine and urged a NATO-Russia rapprochement after the war is over. She also spoke out against sanctions on Russian oil and gas.