Free speech at issue 10 years after Muhammad cartoons controversy | Europe | News and current affairs from around the continent | DW | 30.09.2015

Ten years ago, cartoons of Muhammad in a Danish paper enraged the Muslim world. As Europe grapples with the refugee crisis, the men behind the publication reflect. Malcolm Brabant reports from Denmark. 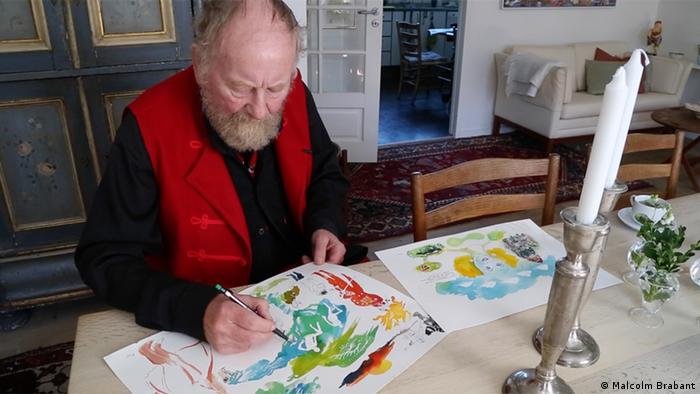 The editor who commissioned the controversial cartoons of the Islamic prophet Muhammad is urging Muslims to redefine blasphemy.

Speaking on the 10th anniversary of the publication of the 12 cartoons, Flemming Rose, formerly the culture editor of Denmark's "Jyllands Posten" newspaper, said a new concept of blasphemy was required in order to "save the social peace in a multireligious, multicultural, multiethnic society."

Under the watchful gaze of Danish protection officers during an interview in Copenhagen's main park, Rose said: "For too many Muslims it's okay to commit violence when non-believers or Muslims commit blasphemy according to Islamic clergy." 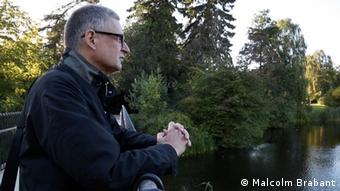 As one of the principal actors in the cartoons' drama, Rose's life has been irrevocably changed by death threats, as has Kurt Westergaard's, the artist who depicted Muhammad with a bomb in his turban.

Both men defiantly say they have nothing to apologize for.

Westergaard's house in central Denmark is now a fortress, after Somali Mohamed Geele, 29, broke in five years ago and tried to carry out a death sentence fatwa which is still active. Geele was convicted of attempted murder and terrorism.

Leaning on his silver-topped cane, Westergaard, now 80 and retired from satire, talked passionately about being one of the most hated men in the Muslim world.

"I think I still have a basic feeling of anger. I worked as a Danish cartoonist according to the Danish traditions. I had done nothing wrong. I had criticized an authority - in this case it was a religion. A big religion. And I think it's a cartoonist's and satirist's job to criticize those in power, whether they are in this case a religion or it is a political party. If you work according to the Danish traditions then you offend people."

Rose commissioned the cartoons after a children's author complained that artists were too scared to draw images for his book about Islam. 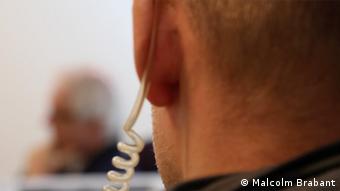 The images were first printed in "Jyllands Posten" in September 2005, but outrage in the Muslim world took several months to ferment, and erupted after a trip to the Middle East by a Danish Islamic delegation. Ahmed Akkari, an imam and the delegation's press spokesman, later acknowledged that the purpose of the visit was to inflame passions. The Danish imams showed their audience other images alongside the Jyllands Posten cartoons, including a picture of what they described as Muhammad depicted as a pig - but was later shown to be an Associated Press photograph of a contestant in a pig-squealing contest.

It succeeded: There were demonstrations around the globe. An estimated 250 people were killed in riots. Danish institutions were attacked. The embassy in Damascus was set on fire. And Danish products were boycotted.

Since recanting and embracing free expression, Akkari has been forced to go into hiding. Unlike Rose and Westergaard, he does not have state protection and lives in Greenland.

In Denmark, Muslim leaders remain uncompromising in their opposition to the cartoons.

"We don't accept the cartoons as a picture or a caricature anything of the prophet," Imran Shah, spokesman for the Islamic Society told DW, "but the very notion of connecting bombs with the religion of Islam - with a very acknowledgement of Islam where you propose that there is no God but God and the last messenger of God sent to this earth was Muhammad - connect that with a bomb, that's a very immature and uncivilized way of starting the debate and discussions."

It's doubtful that any newspapers will reprint the cartoons on the anniversary, especially after the attacks on the Charlie Hebdo offices in Paris in January, and in Copenhagen in February earlier this year. 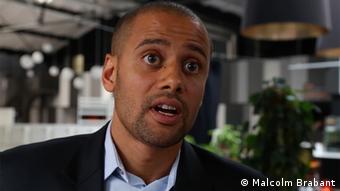 "Basically we have a situation where we have a jihadists' veto, which is being respected, however grudgingly, by journalists and editors, which I think is sad, but at least some have come around to admitting that they are acting out of fear rather than out of respect or tolerance - which is of course a poor excuse," says Jakob Mchangama, a jurist from the Justitia think tank and a leading proponent of unrestricted free expression in Denmark.

He believes Muslims should accept ridicule and satire as a sign of being fully accepted in Western society.

But his views are dismissed by Uzma Ahmed, a Dane of Pakistani heritage who is an activist in the Muslim-dominated Copenhagen district of Norrebro.

Ahmed was conversing with Karolina Dam at a "Welcome Refugees" rally in Copenhagen. 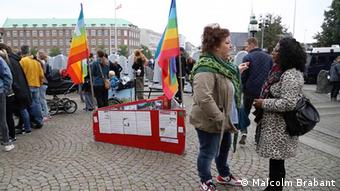 Dam has every reason to despise Islam. Her 18-year-old son Lukas, who had learning difficulties, was radicalized after becoming a Muslim, joined the so-called "Islamic State" and was killed earlier this year in Kobani on the Syrian-Turkish border.

But she's in favor of limiting free expression.

"I think respect for another human being should be before anything else. We don't fight about paintings of Jesus or Christ or Buddha or anything else - that's because it's not a problem. For Muslims it's a problem. Why keep on pushing it? Why keep on poking them in the eye?"

The current influx of refugees and migrants into Europe has prompted Flemming Rose to ask whether the newcomers have to accept Western values and culture in return for sanctuary or whether Europe should moderate its traditions to accommodate the new arrivals.

"To me as somebody who is concerned with freedom, the question is how are we going to be able to preserve fundamental liberties like freedom of expression and freedom of religion - which also implies the right to say no to religion - in a society that is growing more and more diverse," Rose said.

"Where more and more people will be offended by what other people say because they have different understandings of what is important in life. So these clashes are inevitable. 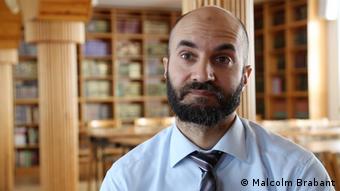 "Unfortunately, most European politicians believe that in order to keep the social peace, we need to restrict freedom. I think it's the other way round. That the natural thing is: If you welcome diversity in terms of culture, ethnicity and religion, you would also have to welcome diversity when it comes to speech, because people express themselves in more diverse ways when they are more different."

In contrast, Shah said there is a limit to freedom: "We're not here to suspend freedom of speech. But we're here to discuss how to use it. But if you want to start a debate or dialogue or critical discussion about religion, then let's do that on a platform of respect and honor, instead of ridiculing and marginalizing an already-marginalized minority within these societies. Because as the pages of history turn throughout the decades that will follow, a just society will be measured [by] how justly it treated the minorities from the majority perspective." 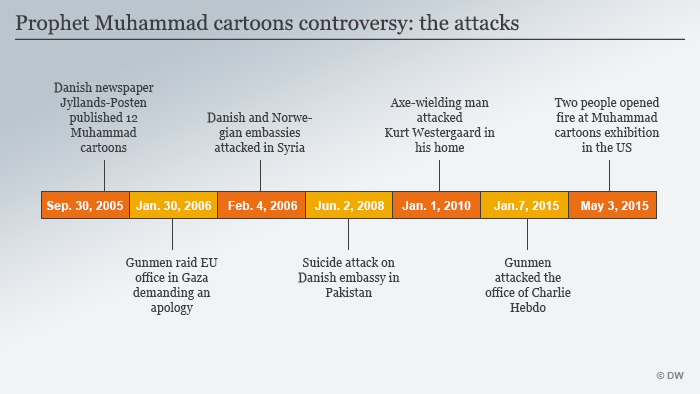 At home in Aarhus, Westergaard reflected on the many refugees coming to Europe: "We will give these people an apartment. We will give their children free education from primary school to university. I hope these people would respect the Danish traditions, the democracy. And if they do that they will be well accepted and integrated in the Danish population."

But Westergaard is adamant.

Westergaard will end his days under guard. How will history regard him? As a principled fighter for traditional western values, or a man out of synch with the new realities of a changing Europe?

Thousands of refugees have passed through the small Scandinavian country of Denmark in the past week. The message from the government is clear: You're not welcome. And that's made many Danes furious. (14.09.2015)