Thousands of people have gathered in Copenhagen for an inter-faith demonstration of solidarity, a month after a Jewish security guard was shot dead at a synagogue. 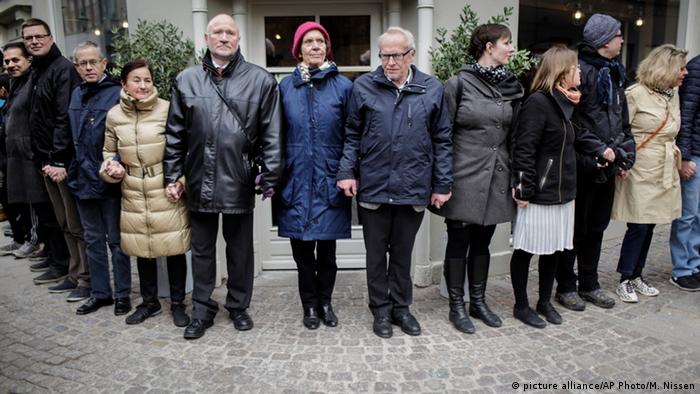 Muslims, Jews and Christians gathered outside a synagogue in Krystalgade in the Danish capital on Saturday to form a human ring around the Jewish place of prayer.

Event organizer Niddal El-Jabr says the idea of the demonstration was to show unity, and "send a powerful statement" that "Jews should be able to have their religion in peace."

Many brought white roses as a sign of peace.

The day's events were inspired by a similar display of solidarity in Scandinavia in recent weeks. On February 27, Copenhagen's mayor, Frank Jensen, joined a "ring of peace" at the nearby City Hall square.

Citing security concerns, Danish police then had all events outside the synagogue banned.

On February 15, one of the synagogue's volunteer security guards, Dan Uzan, was fatally shot by Islamist gunman Omar El-Hussein hours after he killed Danish filmmaker Finn Norgaard at a free speech rally in Copenhagen. Three police officers were injured in the shooting attack.

Swedish artist Lars Vilks is thought to have been the target of the peace rally attack. The 68-year-old has received death threats in the past for depicting the prophet Muhammad with the body of a dog in cartoons.

Danish police have said the gunman suspected to be behind two fatal shootings in Copenhagen was known to authorities and had a "history of violent crime." The dead suspect was released from prison two weeks ago. (16.02.2015)