Robert Lewandowski followed up his Friday night exploits vs Mainz with another sumptuous free kick as Bayern Munich recorded a comfortable victory over Atletico Madrid. 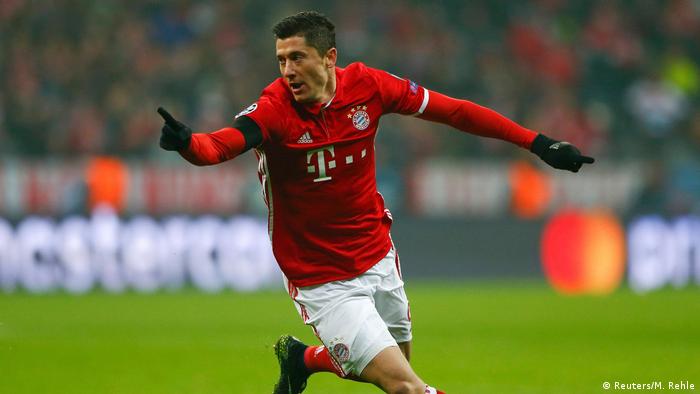 Bayern Munich are safely into the last 16 of the Champions League for the ninth year in a row following a 1-0 win over group winners Atletico Madrid.

Robert Lewandowski's first-half free kick was enough for the Bavarians as Carlo Ancelotti's men avenged their 1-0 defeat in Madrid.

Ancelotti made five changes to the "Guardiola-esque" side which beat Mainz 3-1 on Friday night. Joshua Kimmich, Javi Martinez, Philipp Lahm and Franck Ribery all dropped to the bench to make way for Rafinha, Juan Bernat, Renato Sanches, Arturo Vidal and Douglas Costa as Bayern lined up in a more conventional 4-3-3.

The first big chance of the game fell to the visitors. Bayern afforded Antoine Griezmann too much space on the edge of the box and the Frenchman threaded a pass through to Yannick Carrasco, but Manuel Neuer was quickly off his line to parry the Belgian international's shot.

At the other end, Renato Sanches cut the ball inside from the Bayern left for Douglas Costa to run on to. The Brazilian fired a vicious effort at goal from a tight angle but Jan Oblak stood up well to save.

Just before the half-hour mark, Carrasco made a nuisance of himself again - this time on the edge of his own box, tripping Juan Bernat to concede a free-kick in a dangerous position.

Robert Lewandowski hadn't scored from a direct free kick in two-and-a-half years before his stoppage-time effort against Mainz at the weekend - and the Pole delivered a carbon copy here, curling the ball beautifully beyond the diving Oblak.

In the second half, Arjen Robben tumbled under a challenge in the box but but French referee Clement Turpin waved away his appeals for a penalty. Douglas Costa fired a shot through a crowded penalty area but Oblak was equal to it.

Otherwise, with both teams already of assured of qualification ahead of kick-off, the game ran its course with little further incident.

The draw for the last 16 of the Champions League will take place on Monday 12 December in Nyon.

Barcelona have made short work of Borussia Mönchengladbach in the Camp Nou. Lionel Messi got the ball rolling before Arda Turan decided that he would rather like to take it home. (06.12.2016)