Bayern surge back after early scare to secure Mainz win

Bayern Munich recovered from an early setback to win 3-1 in Mainz. The champions fell behind after just four minutes but were victorious thanks to a Robert Lewandowski brace and a diving header from Arjen Robben- Mainz picked up a shock victory when these sides met in Munich towards the end of last season, a 2-1 win briefly threatening to spark a title race between the Bavarians and Borussia Dortmund, and they began Friday's game where they left off in March.

Back then it was Jhon Cordoba who scored their late winner but this time the Colombian took just four minutes to get on the scoresheet. Yunus Malli picked the ball up in midfield and immediately sought out Cordoba's intelligent run. The forward broke the offside trap to find himself clean through on Manuel Neuer. He looked to have taken the ball too far wide but struck a firm shot low across the German to give the hosts the lead.

Malli was involved again when Bayern equalized just four minutes later in the first of two razor sharp counter attacks that bough first half goals. The Turkish midfielder fell under a Philipp Lahm challenge on the edge of the box but the referee wasn't interested. Bayern were, and they broke rapidly up the field - first through Thomas Müller, then Arjen Robben. The Dutch winger picked out Robert Lewandowski just inside the left edge of the box and the Bayern striker opened up his body to stroke low past Jonas Lössl and restore parity.

Both sides had further chances in a frantic opening fifteen minutes with Thomas Müller guilty of the biggest miss. The German international was sent through one-on-one with Lössl but could only direct a bouncing ball in to the Danish keeper's legs and extend his scoreless run in the Bundesliga this term.

Müller didn't have to wait long for a measure of atonement. In the 20th minute Bayern once again countered at breakneck speed. Franck Ribery was fortunate to burst through a midfield challenge before the ball found its way to Müller. He delivered a deep cross from the right that eluded Lewandowski and the Mainz defence but not Robben. The Dutch winger arrived late at the back post and adjusted his body to guide a diving header past Lössl and give his side the lead.

After the frenetic nature of the opening third of the match, Bayern began to exert a measure of control either side of the break, keeping Mainz at arm's length and protecting a backline without Jerome Boateng who was on the bench after criticism of his recent performances. 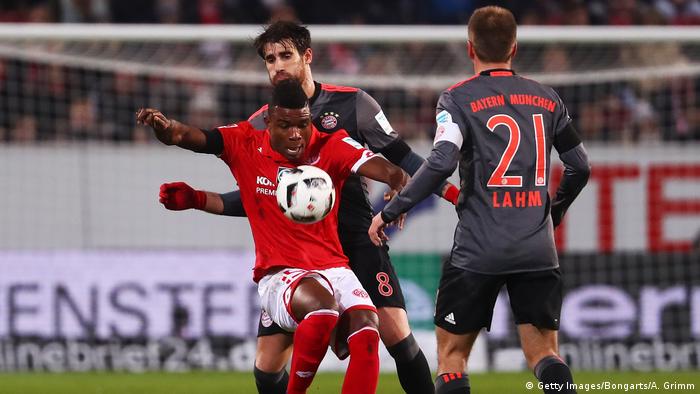 Mainz took an early lead but couldn't hold on

Robben, who posed Mainz problems all night, could've put the game to bed in the 64th minute when he raced on to a ball over the top. But the 32-year-old took an uncharacteristically heavy first touch, allowing Lössl to palm the ball away from his feet as he bore down on goal.

There were one or two scares for the visitors, whose recent form has been patchy, particularly when a half-cleared corner landed at the feet of Levin Öztuali with fifteen minutes left. But the midfielder could only blaze over.

But it wasn't to matter. As the clock ticked in to injury time, Bayern won a free kick on the edge of the box. Lewandowski stood over it for some time as the home fans grew frustrated, before curling it in to the top corner to settle the contest.

The results moves Bayern above RB Leipzig at summit of the table, ahead of the eastern club's game against Schalke on Saturday.