Francis urges youth not to 'throw in the towel'

Pope Francis is set to visit Auschwitz and meet Christian Poles who helped Jews escape Nazi murder. His five-day pilgrimage to Poland, mainly for a youth convention, is the first by the Argentine-born pontiff. 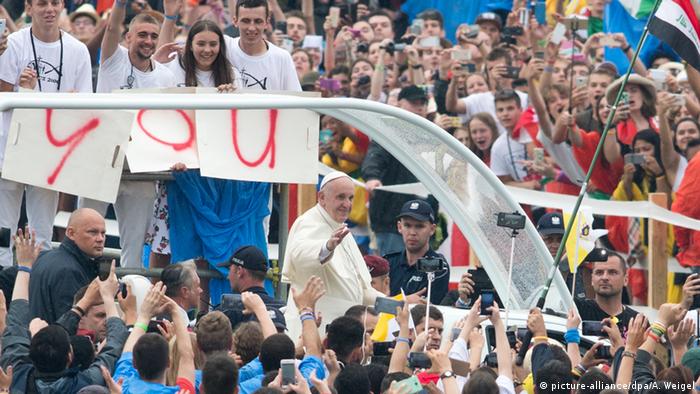 The pope will on Friday become the third pontiff to visit Auschwitz and adjacent Birkenau where during World War Two occupying German troops under Hitler murdered 1.1 million people.

Organizers say his visit to Birkenau, where Jewish victims were gassed to death by the Nazis, will be marked in silence to reflect the horror of those atrocities.

At Auschwitz Francis is due to meet Jewish survivors and Christian Poles who risked their lives to aid Jews. Some 6,600 Polish rescuers are recognized as "righteous" by Yad Vashem, the Holocaust memorial in Israel.

Francis' visit will make him the third pontiff to visit Auschwitz after his predecessors, the late John Paul II, a Pole who died in 2005, and Benedict XVI, a German.

On Thursday, Pope Francis blessed as many as 600,000 Catholics during an outdoor mass at the Jasna Gora monastery's Black Madonna shrine venerated since the 14th century.

Present were members of government and head of state President Andrzej Duda.

Francis praised his Polish predecessor St. John Paul as a "meek and powerful" herald of mercy" and praised Poles for holding firm to their faith during Poland's post-war era of communist rule.

On Thursday evening, one hundred kilometers away at Blonia Park near Krakow, 500,000 faithful, many young people from around the world, cheered Francis during an opening "pep" rally and delivered greetings in many languages, despite rainfalls. 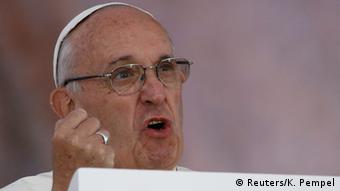 The Pope urged them to welcome refugees, placing himself in direct contradiction with Poland's conservative Law and Justice (PiS) government which has rejected mandatory EU quotas to accept asylum seekers.

"A merciful heart is able to open up to welcome refugees and migrants," said Francis, adding that "it knows the meaning of tenderness and compassion."

He also touched on despair and indifference among youth, telling those attending World Youth Day that "it hurts me when I meet young people who seem to have retired before their time" and were inclined to "throw in the towel."

Addressing his young listeners, he said he was comforted to see them "so rebellious" and ready for change in a church that he has tried to modernize.

Security was tight at the venues, following a string of attacks across Europe. Visitors were warned over loudspeakers not leave their bags unattended.

'World at war:' pope reacts after priest murdered in France

The pope has arrived in Poland. As Catholics met up in Krakow for World Youth Day, a day after the murder of a priest in France, eyes will be on how the liberal pope plays his hand in conservative Poland. (27.07.2016)