The Socialist leader has vowed to "completely dismantle" the camp. But human rights groups and right-wing leaders have called on the president to do more about irregular migration, though from different vantage points. 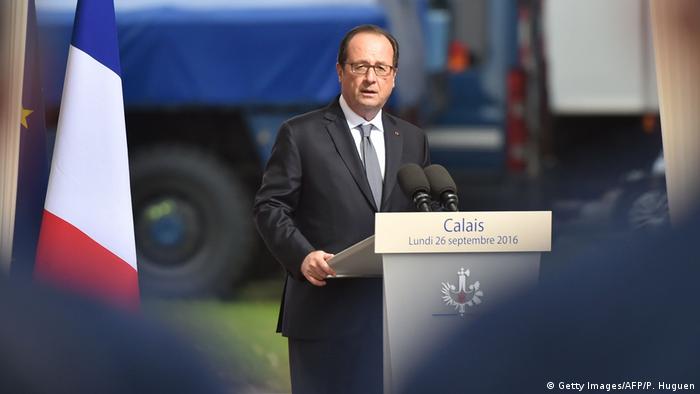 Amid rats and mud, refugees struggle in Calais

Not far from the "Jungle," 3,000 people live among foul swamps in another refugee camp. The inhumane conditions have compelled MSF to build new shelter on drier grounds. Diego Cupolo reports from Dunkirk.

French President Francois Hollande on Monday visited Calais to speak with law enforcement agents and aid workers about the city's makeshift settlement, where up to 10,000 migrants live in poor conditions.

Hollande vowed to "completely and definitively dismantle" the camp, widely known as the "jungle," promising to resettle asylum seekers in reception centers around the country after the demolition. Earlier this year, authorities razed half of the camp.

On Saturday, the president said France "will provide a humane, dignified welcome to people who will file for the right of asylum." However, those rejected "will be escorted out of the country. Those are the rules and they are fully aware of them."

The French government said the informal settlement will be scrapped "before winter," although no timeline was offered for the demolition. The president's visit to Calais is seen as a bid to shore up support ahead of the presidential elections next year.

Hollande has come under pressure from his conservative predecessor Nicholas Sarkozy and anti-immigrant leader Marine Le Pen to curb the flow of migrants from war-torn countries in the Middle East, Asia and Africa.

The Calais camp, which houses migrants attempting to flee to the UK, has been a stain on Hollande's migration policy due to government inaction and allegations of human rights abuse by law enforcement officials.

In 2015, Human Rights Watch (HRW) published a scathing report on the camp, which included migrants' testimonies of police brutality and even torture.

"The police checked the truck and found," a 25-year-old Eritrean woman told HRW. "I said, 'Please help me,' but they beat me and I collapsed outside the truck. They kicked me on the ground."

"Asylum seekers and migrants shouldn't have to face police violence in France, and no one who applies for asylum should be left to live in the street," Leghtas said.

Hollande pledged to accept 80,000 refugees in 2016, a small fraction compared to the amount of asylum seekers Germany has received and hosted since last year.