France's far-right presidential candidate Marine Le Pen has held talks in Beirut with Lebanon's President Michel Aoun. Back in France, a new poll has shown that the populist has narrowed the gap in the presidential race. 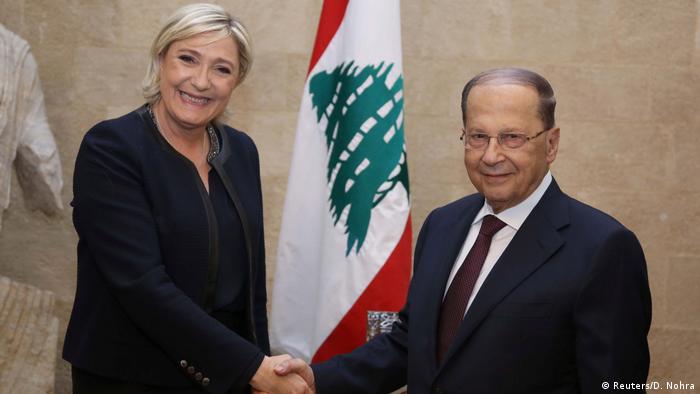 Marking her first meeting with a head of state, Marine Le Pen was hosted on Monday by Lebanon's President Michel Aoun (pictured above).

With just nine weeks until French voters head to the polls for the first round of the presidential election, her visit to the former French protectorate - not to mention her unusual encounter with a foreign president - seemed an attempt to bolster her image among French voters as an internationally credible politician. 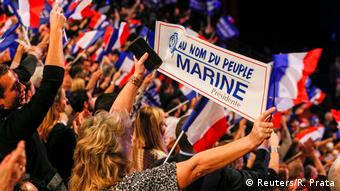 Syria conflict on the cards

For 30 minutes, the French far-right party leader met with the Middle East's only Christian president in the presidential palace in the hilltop suburb of Baabda where they "discussed the long and fruitful friendship between our two countries."

Also on the agenda was the refugee crisis in Lebanon, where some 1.2 million Syrians have fled from conflict. Just a day earlier, the National Front (FN) leader, whose party takes an anti-immigrant stance, called for the international community to step up humanitarian aid to keep the refugees in Lebanon.

Following a second meeting, this time with Lebanese Prime Minister Saad Hariri - a staunch opponent of Syrian President Bashar al-Assad - Le Pen said she told Hariri that there was "no viable and workable solution" to the Syrian civil war beyond choosing between Assad and the self-styled "Islamic State" (IS).

Le Pen has previously made known her preference for Assad - a position that runs counter to the French government's strong anti-Assad approach.

Shunned by European leaders over her party's stance on immigration and anti-EU rhetoric, Le Pen has met few top foreign officials since taking control of the FN in 2011. German Chancellor Angela Merkel, for example, has refused to meet with the populist right-winger.

In a clear reference to Le Pen's call for a referendum on France's EU membership, Spanish Prime Minister Mariano Rajoy also told French news agency AFP last week that "a victory of the populists would be the end of Europe."

Defeat likely in second round

Le Pen's visit to Lebanon on Monday came as the right-wing presidential candidate gained some ground on her main election rivals, conservative Francois Fillon and independent Emmanuel Macron who also visited Beirut on January 24, where he met both Aoun and Hariri.

Her improvement in ratings was most notable against Macron, with whom she was seen a week ago as polling 36-37 percent to his 63-64 percent in the second round.

However, despite narrowing the gap, the Opinionway poll showed that she would still lose to either of them in the May 7 runoff for the presidency.

Going head to head with Macron, she would still go down by 42 percent against his 58, while against Fillon she would lose with 44 percent to his 56, the poll found.