Thousands turned out in cities across France for the latest round of yellow vest demonstrations. Protesters lamented their disappointment in Macron — one woman told DW that the crisis "ends when Macron is booted out." 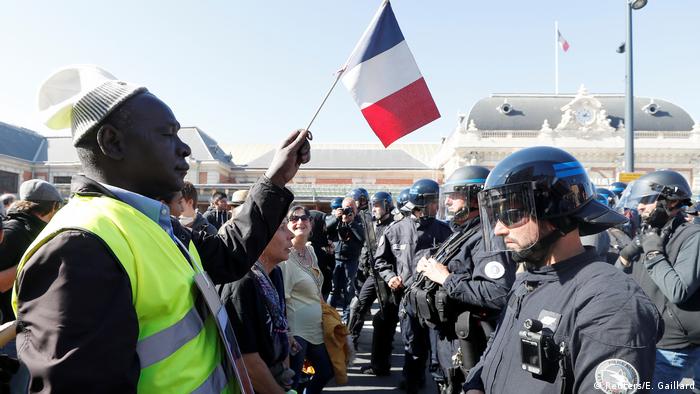 Isabelle Darras donned her yellow security jacket once again on Saturday, joining friends to march across the French capital on a sunny afternoon.

"People give the yellow vests a very negative image," said Darras, a music professor, as she scanned the crowd slowly moving down the Boulevard Saint Michel, in Paris' Latin Quarter. "But look at this — it's peaceful."

With yellow vests now banned from the scarred Champs Elysees, the latest demonstration — the 19th round of protests — instead saw thousands cross the city from south to north, ending at the Sacre-Coeur basilica that towers over the the city.

More than 40,000 people marched across France, according to the French Interior Ministry, including 5,000 in Paris — higher than last week's demonstrations but markedly lower than the massive gatherings of December.

If nothing else, the largely calm protests offered a short-term reprieve for French President Emmanuel Macron and his centrist government, under fire after last week's rioting in Paris left businesses around the Arc de Triomphe torched and vandalized. This time, the government took no chances, barring demonstrations in some parts of the capital and several other cities in France.

In a highly controversial move, Macron also sent troops out for the first time to guard sensitive sites, although none were directly deployed in the demonstrations. 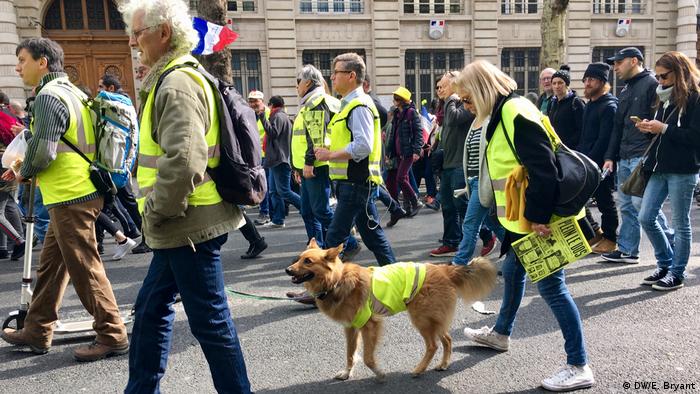 In some ways, Saturday's outpouring seemed to be a replay of traditional French protests — largely boisterous affairs in the past, complete with grilling sausages and a hodgepodge of union slogans. While both trappings were absent, demonstrators appeared in good spirits as they sang the French anthem and called for Macron to be fired.

Still the broader takeaway was more bitter than upbeat.

"The crisis for us ends when Macron is booted out," said Christelle Camus, 50. "I've been working since I was 17, and I know there'll be nothing for me when I retire. But there's my daughter and grandchildren and I'm fighting for them."

Mechanic Federica Briet is also worried about the future.

"It's harder and harder to make ends meet," he said. "In another 15 years I'll be retiring and handing things over to my children — and I'm worried about what they'll inherit."

Macron launched weeks of town hall debates across the country to help diffuse a crisis that erupted in November over a proposed fuel-tax hike, and has since morphed to embrace a broad array of grievances.

But the next steps appear unclear. One potential exit strategy for the 41-year-old president — a referendum on proposed reforms to quash the dissent — carries the risk that citizens may vote against it, dealing him a humiliating and potentially crippling blow.

And while the town meetings gave Macron a bounce in the polls, many yellow vests dismissed them as a public relations stunt. French authorities were also sharply criticized over their handling of last week's violence, which happened as Macron was on a brief ski break, and his interior minister, Christophe Castaner, was spotted dancing in a nightclub.

Castaner has tried to rebound swiftly, replacing the Paris police chief and ramping up the numbers of riot police for this latest edition of the protests. The government also redeployed troops normally tasked with domestic anti-terror operations, in a move sharply criticized by some opposition politicians.

"In no case should protesters be considered domestic enemies," far-left lawmaker Jean-Luc Melenchon wrote in a letter to Prime Minister Edouard Philippe, calling the redeployment "risky" and "perilous."

Ordinary French citizens also gave a thumbs down to any troop involvement.

"What are they supposed to do — fire on the crowd?" asked a business executive who gave only his first name, Patrice, as he observed the marchers file past. "The state is assaulting our most fundamental freedoms."

Still, public support has been steadily dwindling for the leaderless and diffuse protest movement. An OpinionWay poll published this week for French broadcaster LCI found just over four in 10 people in France still supported the yellow vests — five points less than the previous week. Another found more than one-third were downright hostile to the protesters.

"I support their grievances, but not the way they're manifesting them," said Olivier, a retiree from Alsace, who also declined to give his last name. "There are other ways to protest, for example by voting."

The weeks of protests have also taken a toll on the economy. Earlier in the week, France's finance minister Bruno Le Maire revised the country's growth forecast this year down to 1.4 percent, from a previous 1.7 percent. Addressing the Senate, he estimated the cost of damage wrought by the violence at roughly €200 million.

Tourism has also taken a hit, with hotels and businesses in Paris and elsewhere reporting a drop in revenue. While many museums were open Saturday, other public attractions were shuttered, including the Luxembourg Gardens on the Left Bank.

Still, plenty of tourists were out on Saturday, snapping photos of the protesters.

"I think they're right," said Arlette Matta from Lebanon. "Governments need to listen to the protesters and to young people. People don't demonstrate because they want to — they do so because things aren't working.