The new legislation would criminalize illegal border crossings but aims to cut the waiting time on asylum applications. Migrant rights groups have called for the bill to be withdrawn, labeling it "too repressive." 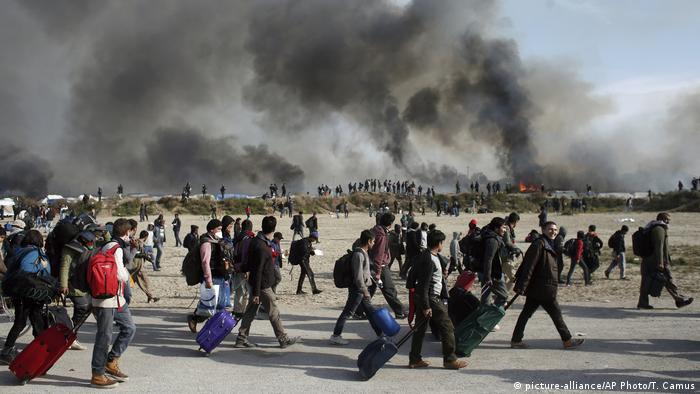 French President Emmanuel Macron's government presented a controversial immigration bill to the Cabinet on Wednesday, amid criticism from migrant organizations and members of Macron's own party.

Macron has faced pressure to act on immigration after he won the 2017 presidential election, which saw 34 percent of the second round vote go to far-right National Front leader Marine Le Pen, who had campaigned on immigration concerns.

The new legislation includes plans to:

'Most vulnerable will be punished'

Interior Minister Gerard Collomb has said the law is "balanced" and "aligned with European procedures," arguing that if France did not tighten its laws it would attract refugees put off by tougher rules elsewhere in Europe.

"If we don't take this into account, we won't be able, tomorrow, to guarantee the right to asylum in France," Collomb said.

But staff at the asylum court have raised concerns that the tighter turnaround on cases will make it harder for applicants to appeal.

The bill has caused some divide in France's left-right coalition government. Jean-Michel Clement, a lawmaker who joined Macron's centrist Republic on the Move (LREM) party after switching from the Socialists, said the new legislation would hurt those who are already vulnerable.

"The most vulnerable will be punished," Clement said. "It's not forbidden to put a little humanity into a draft law."

Another LREM lawmaker, Mathieu Orphelin, on Tuesday said increasing the detention time from 45 days to 90 days was problematic, adding that he intended to draw up amendments to the bill.

People working with organizations that assist refugees also criticized the bill, with some workers at France's refugee protection office OFPRA going on strike to protest the bill on Wednesday, calling it "an unequivocal departure from France's tradition of asylum."

Migrant charity Cimade said it was asking for the bill to be withdrawn. "We're not even in favor of fighting for changes to the bill, because the philosophy behind it is just too repressive."

How many asylum claims does France receive: According to OFPRA, France received a 100,000 asylum applications in 2017 — its highest number for a single year to date.

'Jungle' camp gone, but Calais still a migrant hot spot: At the center of the French immigration crisis is the port town of Calais in the country's northeast, where the infamous "Jungle" migrant camp was closed down in October 2016. The city is the closest point between France and Britain, with two cross-Channel transport systems: the Eurotunnel and ferries. The town continues to be a hub for asylum-seekers hoping to make it to the United Kingdom.

Tension between France and Britain: An agreement in 2003, known as the Touquet Accords, moved the British border to Calais and left France to deal with migrants who had been refused entry into Britain. In January, Macron said he wanted to negotiate a better police cooperation with the UK to handle the migrants in Calais, as well as more money from Britain to help develop the city.