Video footage allegedly showed several police officers attacking and racially abusing Black music producer Michel at his Paris studio. The officers were initially suspended and have now been called in for questioning. 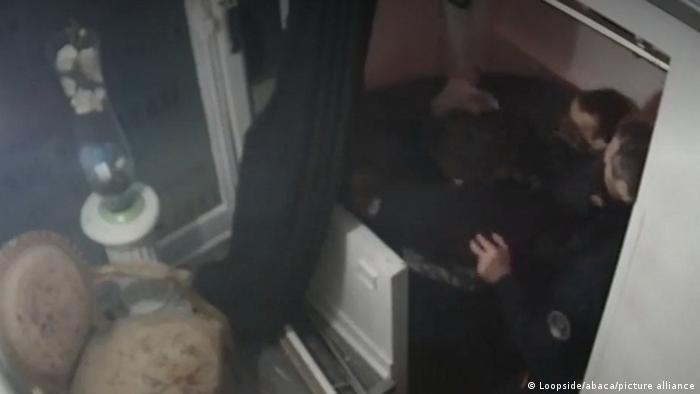 Four French police officers were arrested Friday after a video purportedly showed them beating up a Black music producer in Paris, the prosecutor said.

The officers who had previously been suspended were called in for questioning and are being held at the National Police Inspectorate General (IGPN), a source close to the case told the AFP news agency.

A video of the officers beating Michel Zecler emerged on Thursday, triggering outrage and condemnation across France.

Online news site Loopsider published security camera images purportedly showing three officers punching, kicking and using their truncheons on the producer, as he entered his studio in the French capital late on Saturday.

Michel said he had had been outside without a mask, as required by current local coronavirus rules, when he saw a police car approach. To avoid them, he slipped into his production studio to avoid getting a fine.

Surveillance cameras inside showed how the officers followed Michel inside and beat him in the entrance area for several minutes.

Indications of racism in German police

Michel was initially arrested for violence and failure to obey the police. But prosecutors threw out the probe and instead opened an investigation against the officers themselves for committing violence while in a position of authority.

French President Emmanuel Macron said Friday he was "very shocked" about the incident, according to Elysee circles.

"STOP RACISM," Mbappe tweeted together with an image of a bloody Michel on Thursday. The images made the front pages of French newspapers earlier in the day.

The alleged attack has brought the issue of repeated police brutality against Black and ethnic communities to the fore, just months after US police killed Black American George Floyd in Minneapolis in May.

Within hours of Floyd's death, which happened when a white police officer knelt on his neck in the street for nearly nine minutes while arresting him, Black Lives Matter protests erupted across the US and later spread to Europe, including Paris.

In France, the outrage over Floyd's death has been felt most strongly in deprived city suburbs where police often clash with youths from ethnic minority backgrounds.

Paris police already faced accusations of excess force this week when they cleared out an illegal migrant campsite in a central Paris square.

The alleged beating also came amid controversy over a draft law that would limit journalists' ability to show images of French police officers at work.