Environmental offenders could be handed a fine of up to €4.5 million, or 10 years in prison. The law is meant to punish those who commit a "general crime of pollution" or "endanger the environment." 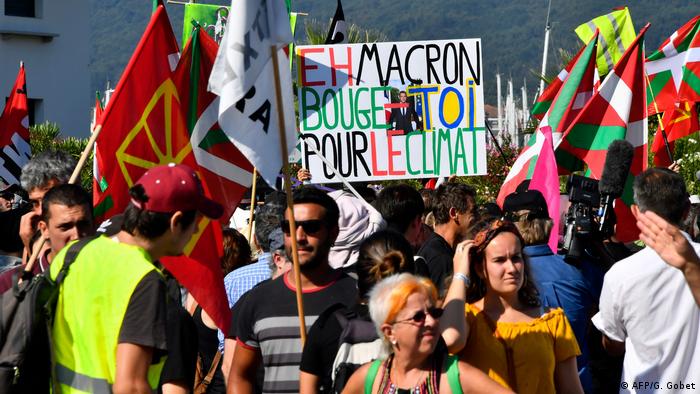 France is set to make serious intentional damage to the environment punishable by up to 10 years in prison, as part of a planned "ecocide" law, government ministers said in remarks published on Sunday.

The law was proposed following a recommendation made by the Citizens' Convention for the Climate, an environmental committee of 150 people, created by the government a year ago.

Read more: In Europe, 1 in 8 deaths linked to pollution: report

Committing an "ecocide" offense could be met with a fine of up to €4.5 million ($5.3 million), or up to 10 years in prison in cases of "intentional violation" of climate laws, Justice Minister Eric Dupont-Moretti and Ecological Transition Minister Barbara Pompili told Le Journal du Dimanche weekly newspaper.

"We are going to create a general pollution offense," said Dupont-Moretti. "Punishment will be staggered according to a perpetrator's intentions."

"We are crossing a historic milestone for environmental justice," tweeted Pompili.

French lawmakers intend to legally define a number of new offenses in order to properly punish violations of the ecocide law, according to Dupont-Mortti. Those offenses include a "general crime of pollution" and "endangering the environment."

"I want to put an end to environmental banditry," he added.

Lawmakers also hope to fine violators of environmental laws "up to 10 times the profit they would have generated by throwing waste into the river."

Punishment before committing the offense?

Under the "endangering the environment" offense, potential offenders could be punished even before committing acts of illegal pollution. Lawmakers also plan to improve their handling of pollution cases and civil claims, including by creating special environmental jurisdictions.

The wording of the law was also a contentious topic, as the French consitution did not allow for the qualificaton of such actions as "crimes," – they could only be considered offenses, said Dupont-Moretti.

The convention has also submitted 149 proposals to cut greenhouse gas emissions to President Emmanuel Macron, 146 of which Macron promised to convert into government policy.

"No one will fall through the cracks anymore, and this is a powerful signal for everyone to respect environmental law," said Pompili.  She added that lawmakers are also going to set up a "restoration mechanism" to restore the damage caused. Damage to the environment must not just be "prevented and punished," but also "restored," she said.

"We want environmental law to be respected everywhere in daily life. We are laying the structural foundations," said Dupont-Moretti.

Read more: Doing Your Bit: A French engineer has created a biodegradable plastic