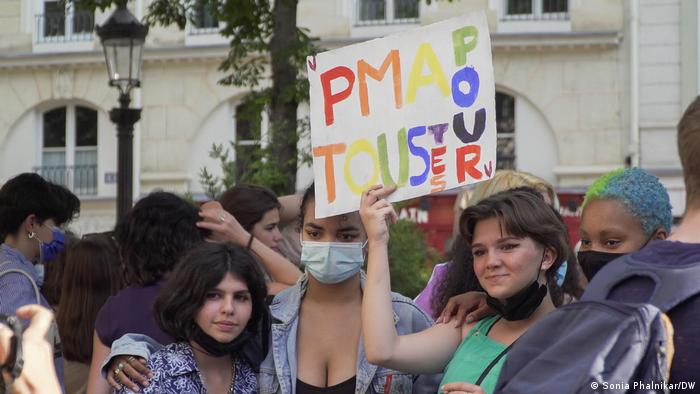 LGBTQ campaigners have advocated for the law for years

"We're here to vote on a law underpinned by freedom, equality, solidarity and dignity," Coralie Dubost, a lawmaker from the ruling La Republique en Marche party, told the assembly.

The bill was finally approved after 500 hours of debate and over 12,000 amendments, Dubost said on Twitter.

The conservative-led Senate had sought to block single women and lesbians from being reimbursed by French social security for medically assisted pregnancies.

But French President Emmanuel Macron's ruling party and its allies hold majority of the lower house, which approved the bill with 326 votes for and 115 against.

The law becomes effective as soon as it is signed by the executive.

The measure is part of a wide-ranging bioethics law presented by Macron's government.

The new legislation will expand access to fertility treatments, including artificial insemination and IVF.

The bioethics bill will also end anonymity for sperm donors, who will have to agree to reveal their identity if their children ask to know their biological father when they turn 18.

However, it does not address France's ban on surrogacy  women carrying and delivering babies for other couples.

It also did not meet demands that transgender women be allowed to donate sperm for use in fertility procedures before their gender reassignment.

France could extend fertility treatment to all women

Fertility treatments are free in France, but the new law includes lesbian couples and single women.

Trying to make up for lost time, Health Minister Olivier Veran said authorities were preparing to apply the new law as quickly as possible so that the first children could be conceived by the end of the year.

What did LGBT+ groups say about the new law?

LGBT+ rights groups had been pushing for the reproduction measure since France legalized same-sex marriage in 2013.

"We are satisfied that this is getting done... but this has been a painful birth,'' he said, noting the long time it took French legislators to pass the bill.

Fabien Joly, a spokesman for the association of French same-sex families, warned that demand is so high it could lead to sperm bank shortages.