Two decades after France ended conscription, the government has launched a program targeting young people. The government is hoping to "increase the cohesion and resilience of the nation" with the service. 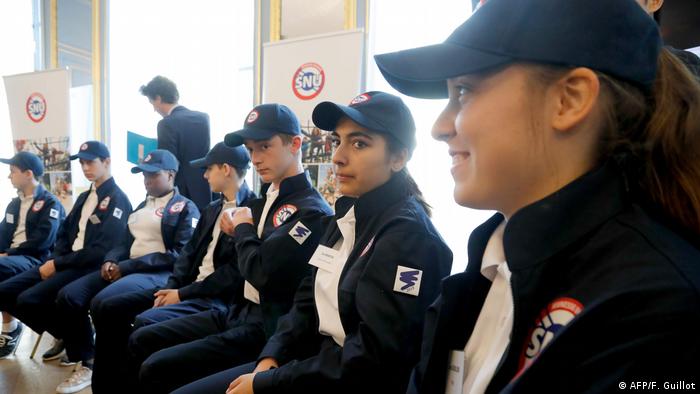 According to the government, the program will help "develop a culture of commitment" and "increase the cohesion and resilience of the nation." Macron said he wanted to give young people "causes to defend and battles to fight in the social, environmental and cultural domains."

For the first trial run, 2,000 teenagers were chosen out of 4,000 volunteers, including 50 with disabilities. Later this year, they will spend an additional two weeks working on a local project. In the future, the government would like to expand the program to eventually target some 800,000 young people per year.

According to an IFOP survey, the initiative is supported by some 74% of the country. However, some have questioned whether two weeks is sufficient to establish societal cohesion among young people.

"We agree with the government's findings on the lack of social diversity, but we think that the SNU is not the answer," Orlane Francois, who heads a student union, told AFP news agency. "Two weeks in barracks, it can seduce a part of the population nostalgic for military service, but not young people who are the ones affected by it."

At least six people, including a teenage girl, have died in a powerful storm on the French island of Corsica. Several other French towns have also been hit by thunderstorms leaving around 1,000 households without power.

John Oseni looks like every ordinary Nigerian teenager. But he’s anything but ordinary. The 16-year-old secondary school graduate is a tech tycoon. His dream is to become the next Elon Musk.