Both France and Germany have urged Greece to put forward serious proposals that would allow financial aid talks to resume. Greek Prime Minister Alexis Tsipras has said there is an urgent need to lift capital controls. 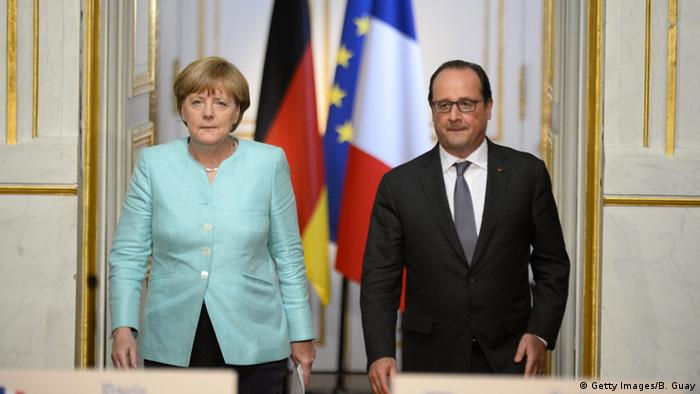 Chancellor Angela Merkel and French President Francois Hollande said Athens would have to move quickly to secure a deal that would keep Greece in the eurozone.

Merkel, who held talks with Hollande at the Elysee Palace, said the conditions for a bailout package had not yet been met.

"That is why we are now waiting for very precise proposals from the Greek prime minister, a program that will allow Greece to return to prosperity," said Merkel. The chancellor, who said Greece should put its proposals on the table this week, claimed eurozone countries had already shown "a lot of solidarity with Greece".

Holland stressed the door was "open for discussion," but urged there was not much time left.

Separately, Dutch Prime Minister Mark Rutte said Greece would have to accept fundamental reforms if it wanted to remain in the euro. Rutte told the Netherlands parliament that creditors had no plans to draft a new proposal after the "no" vote in the Greek referendum on Sunday, saying that the ball was squarely in Greece's court.

Greek Prime Minister Alexis Tsipras has said he will bring a proposal with him to an emergency summit of eurozone leaders on Tuesday. However, it remained unclear how much it might differ from Athens' previous offers.

Tsipras told the European Central Bank chairman Mario Draghi in a phone call on Monday evening that there was an immediate need for capital controls in Greece to be lifted. Athens has imposed the measures itself in an effort to prevent the collapse of the banking system, but would need help from the ECB to lift restrictions on cash transfers and withdrawals.

The Greek finance minister in the run-up to the vote, Yanis Varoufakis, announced on Tuesday he was stepping down in an effort to ease friction with creditors. Varoufakis had angered many European counterparts by dismissing demands for economic reform and welfare cuts as "terrorism" and "fiscal waterboarding."

Varoufakis was replaced by the economist Euclid Tsakalotos, who has said he wishes to continue the diccussion with creditors.

LeBron James hits back at Zlatan Ibrahimovic criticism 19m ago