France Embraces Nuclear Cooperation With India | Europe | News and current affairs from around the continent | DW | 30.09.2008

The European Union and India ended their summit with the EU agreeing to offer a tentative deal on nuclear energy cooperation. France, however, was less cautious, vowing to help India with a new nuclear trade pact. 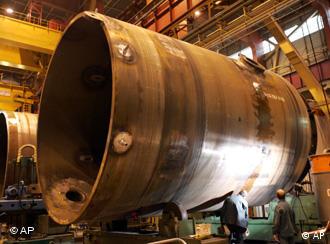 The meeting between India's Prime Minister Manmohan Singh and European Union leaders in the French port of Marseille ended Monday, Sept. 29, with an agreement to explore "the possibility of EU-India cooperation in civil nuclear research and development," However, differences remained over the limits which should be placed on such cooperation.

A draft prepared by the EU called for cooperation "in a manner consistent with the international non-proliferation regime."

But India, which has not signed the UN's non-proliferation treaty (NPT) and is wary of signing any declaration which appears to commit to it, insisted that the more general phrase "consistent with their respective international commitments" be used. 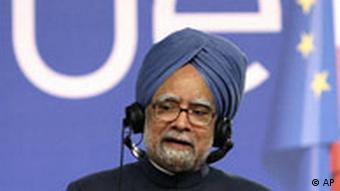 Singh found himself at odds with the EU over climate change

Sarkozy also concluded some domestic business on the sidelines of the EU-India summit when he and Singh vowed to boost nuclear energy cooperation.

"France, which has great trust in India and its prime minister, has worked hard so that India can have access to civilian nuclear energy," said Sarkozy.

He made the comment at a press conference with Singh, who arrived in France from the US, where he took India a major step closer to rejoining global nuclear commerce after 30 years in the cold.

Singh was to meet with French political leaders and nuclear energy executives in Paris Tuesday and was expected to sign a major nuclear trade pact.

French energy firm Areva said Monday it hopes to profit from the nuclear pact by supplying the Asian giant with two of the latest design of reactors.

A spokeswoman said Areva planned to ship two third-generation European pressurized reactors and a supply of nuclear fuel to India, which could lead to a bigger contract to supply a series of power plants.

On Saturday, the head of the Indian chamber of commerce said his country's nuclear market could be worth up 20 billion euros ($29 billion) to Areva and other French firms such as Alstom over the next 15 years. 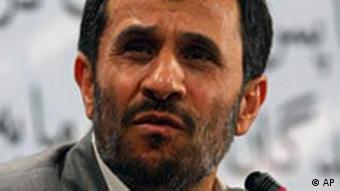 Ahmadinejad is less of a pariah in India's eyes

India was banned from nuclear trade 30 years ago after its first nuclear test and refusal to sign the Non-Proliferation Treaty, but the Vienna-based Nuclear Suppliers Group lifted the ban this month after lobbying by Washington.

The US House of Representatives passed a major atomic energy pact, which, if it gets Senate approval, will allow India to buy nuclear power plants, fuel and technology, provided it allows UN inspections of some of its facilities.

New Delhi, which is critically short of energy to fuel its booming economy, is looking at investments worth billions of dollars in its power sector.

The world's second producer of nuclear energy after the United States, France is vying to lead a worldwide revival of the industry, fuelled by worries about global warming and rising energy prices.

Since Sarkozy's election last year, France has signed nuclear power deals with half a dozen developing nations in the Middle East and North Africa.

Global warming, global security and the world-wide financial crisis are set to top the agenda when the European Union and India hold their annual summit in Marseille, France on Monday. (29.09.2008)

Germany has grudgingly accepted a landmark civilian nuclear trade deal with India which gives the Asian giant the green light to buy nuclear fuel and technology on the global market. (09.09.2008)

An expert commission has recommended pushing back Germany's planned nuclear phase-out by at least eight years, according to a news report published on Tuesday. The goal is to reduce expensive energy imports. (05.08.2008)