Nuclear waste from France has been sent to Siberia for storage. According to news reports, over 100 tons of uranium were transported to Seversk. France's ecology minister has called for an investigation into the case. 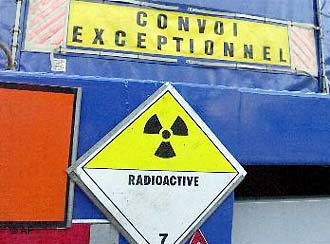 Enviromentalists say the waste should be sent back to France

According to the French daily newspaper Liberation and Franco-German television broadcaster Arte, France's electricity company EDF has sent 108 tons of uranium to Siberia since the mid-1990s. About 13 percent of France's nuclear waste is stored in open-air parking lots near a nuclear plant in Seversk, said reports on Monday.

EDF said it sends uranium left over from nuclear plant production in France to Russia to be treated so that it can be used again.

Ten to 20 percent of the uranium came back to France to be used in French power plants, an EDF spokeswoman said Monday. A company official denied that waste was left outdoors.

Liberation based its information on an eight-month investigation which was broadcast by Arte on Tuesday.

The container was allegedly shipped by boat from Le Havre in northern France to the Siberian atom complex "Tomsk-7," located 8,000 kilometers (5,000 miles) away. This was only possible due to a legal loophole: Depleted uranium, recharged uranium and plutonium are not considered atomic waste but "radioactive material," according to the report by journalist Laure Noualhat.

Therefore, the shipment to Russia was not officially treated as an atomic waste transport overseas - that would have been forbidden by law.

France's ecology minister, Chantal Jouanno, has called for an investigation into the case. Jouanno said Tuesday on France-Info radio that the country's nuclear energy industry "must be completely transparent."

Anti-nuclear power movement group "Sortir du Nucleaire" accused Jouanno of trying to win time by announcing an investigation. The group has demanded that the atomic waste be brought back from Russia.

France, like Germany, has not yet found a location to permanently store nuclear waste underground. French nuclear authorities are considering permanently storing the waste generated in the past three decades and the waste produced in the future near Bure in eastern France, 500 meters (1,640 feet) below ground.