Authorities in France have arrested dozens of people for condoning terrorism since last week's attack on the magazine Charlie Hebdo. Among those targeted by prosecutors was controversial French comedian Dieudonne. 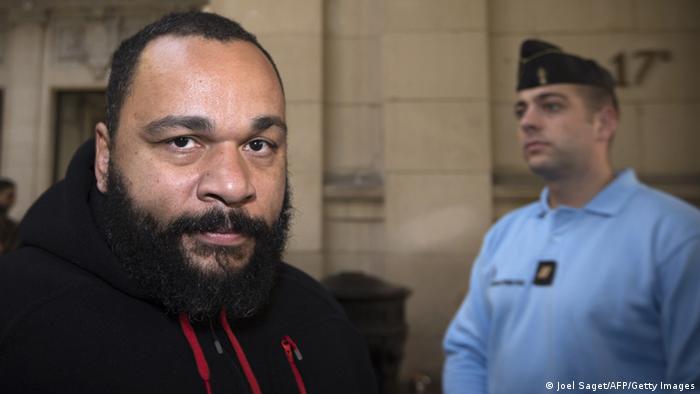 According to French authorities, 54 people had been investigated in connection with offences including hate speech, anti-Semitism and defending terrorism in the week to Wednesday, following the series of terror attacks which shook Paris last week.

Among those detained was well-known controversial comedian Dieudonne M'Bala M'Bala (archive picture above), who earlier this week had posted on his Facebook page "Tonight, as far as I am concerned, I feel like Charlie Coulibaly," combining the "Je suis Charlie" slogan which was widely used to express condemnation of the murders of staff from satirical magazine Charlie Hebdo, with the name of gunman Amedy Coulibaly, who killed a policewoman and four hostages at a Paris kosher supermarket in the days which followed.

Dieudonne has in the past been convicted for anti-Semitic comments. He made popular an arm gesture which resembles a Nazi salute but which he has said is anti-establishment.

On Wednesday, Dieudonne was released from custody pending trial on charges relating to justifying terrorism.

"We are in the land of freedom of expression? This morning, the government provided the demonstration of that," he said sarcastically.

Prosecutors in France have been instructed to stringently enforce laws against words or actions deemed to be racist, anti-Semitic or supportive of terrorism, the Ministry of Justice said in a statement. Penalties for violating such laws can reach up to five years in prison – up to seven years for inciting terrorism online.

The crackdown comes as copies of Charlie Hebdo's "survivors' edition," sold out within minutes at news stands across France despite an extended print run.

Yemen-based al Qaeda on the Arabian Peninsula (AQAP) on Wednesday claimed responsibility for the January 7 attack on Charlie Hebdo's headquarters by brothers Cherif and Said Kouachi. A total of 12 people were killed in that attack, which began three days of violence in and around the French capital. The following day gunman Amedy Coulibaly killed a policewoman, then later four hostages at a kosher supermarket on January 9. All three gunmen were killed.

US State Department authorities have said the AQAP video is authentic, but officials were still working to determine whether the claims within it - including that al Qaeda trained and financed the attackers, were true.

A brutal anti-Semitic assault in a Paris suburb has stunned residents - Jewish and otherwise - who were used to living in relative harmony. Elizabeth Bryant reports from Creteil, France. (11.12.2014)