A French commission of experts is taking a fresh look at France's role in the Rwandan genocide 25 years ago. To come up with a fair assessment of the mutual recriminations will be no easy task. 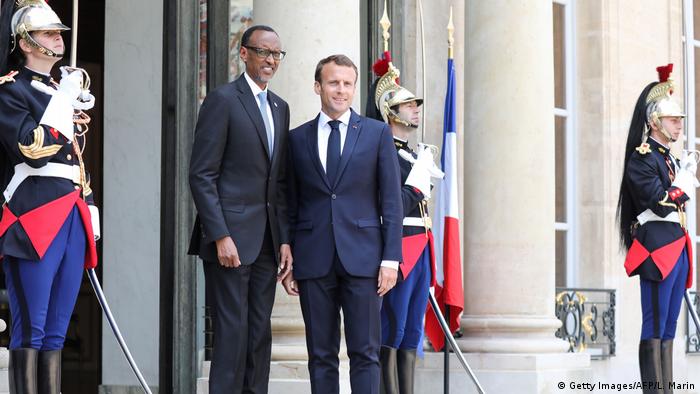 The times in which France and Rwanda were on the best of terms are long gone. There have been too many accusations since France sent its troops to Rwanda during the genocide. France had close ties to the old Habyarimana regime, led by the Hutu political elite of the time. Many of the main orchestrators of the genocide fled Rwanda to neighboring Zaire (now the Democratic Republic of Congo) by crossing French protection zones.

For years relations between France and President Paul Kagame's government have been cool at best and often kept to a minimum. The past two years have, however, seen a relaxation of tensions between the two countries.

French president Emmanuel Macron was invited to this year's 25-year genocide commemoration – a further sign of reconciliation. When Macron instead sent Herve Berville, a young French lawmaker of Rwandan descent who represents the country's parliamentary friendship group for relations with Rwanda and Burundi, many people were appalled.

Rwanda's foreign affairs minister, Olivier Nduhungirehe, however, denied relations had been further strained. "It's not a problem," Nduhungirehe told DW. Berville had been a worthy representative of the French president. "The Franco-Rwandan relationship has experienced a fresh start on many levels. We will continue to work on improving the relationship. We're especially focusing on a number of specific problems that still exist – but we're working on those." 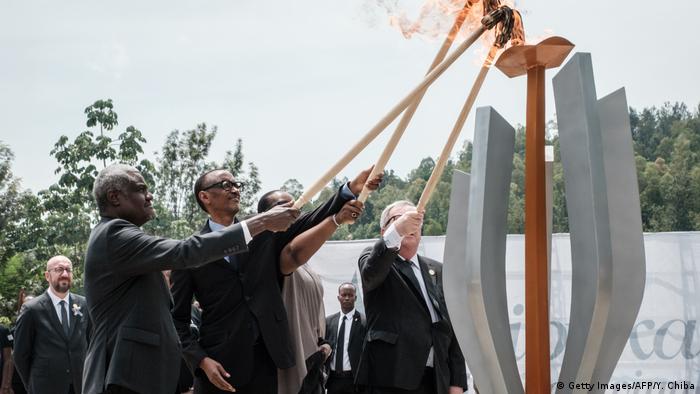 In April 2019, Rwandans remembered the victims of the the genocide 25 years ago

France's role in the genocide

Those specific problems could include France's military operation "Turquoise." Between June and August in 1994, France controlled a humanitarian safe zone in the southwest of Rwanda. The zone did actually help in saving the lives of Tutsis and other victims of the genocide. But even in the "Zone Turquoise" people were killed. For Rwanda's government, this implied that France was helping its former Hutu allies. "Operation Turquoise protected genocidaires when the genocide was almost over," Nduhungirehe insists. But, he says, they didn't stop the killings.

This line of argument also has prominent support in France. Guillaume Ancel, a French army veteran who served in Rwanda, published his memoirs last year under the title: "Rwanda, la fin du silence" or "Rwanda, an end to the silence." His take: that France portrayed its military operation as a humanitarian mission in order to hide its support of the genocidaires.

The non-governmental organization Survie, which often criticizes what it calls France's neo-colonial endeavors, goes even further. It says that France played an active role in the genocide by continuing to arm the perpetrators at a time when there were enough indications of planned killings. Survie bases its arguments on publicly available documents from the time.

In April 2019, President Macron established a commission of experts to examine archived documents that had previously been under lock and key. It's a move that the Rwandan government has welcomed and has offered its assistance, on condition that the commission strictly focus on the aspect of the role played by France.

But is it fair to highlight France's role in the conflict and ignore the roles of other actors? Rwandan diplomat and politician Jean-Marie Vianney Ndagijimana believes that critics must look further than France. Ndagijimana was the Rwandan ambassador to France between 1990 and 1994, the decisive years leading up to the genocide. When Kagame's Rwandan Patriotic Front (RPF) took over, he became Rwanda's foreign minister. He later fell out with Kagame's government and now lives in exile in France.

"France wasn't the only country which was involved, supporting one side or the other," Ndagijimana told DW. There should also be an examination, he said, of the kind of support the Tutsi forces received from Uganda, the UK and the US. "The RPF has very modern weapons. We must speak about those who helped the RPF, those who helped the Rwandan government at the time, why and in how far that was legitimate." 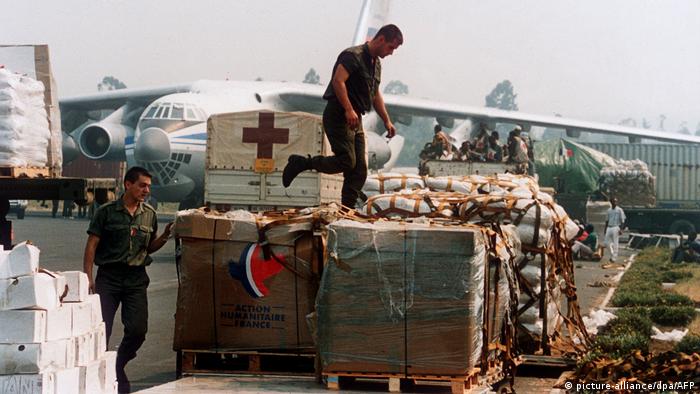 Questioning the role of the RPF

Ndagijimana also believes that the efforts of the French soldiers should be recognized. "It is the greatest injustice that the people who saved so many Rwandans are now blamed for having failed in their mission," he said, pointing out that when the genocide was over, the survivors from "Zone Turquoise" composed songs in praise of the French. For years, Ndagijimana said, there was no mention of France sharing the blame for what happened — until the day when a French judge opened a probe into the role of Kagame and the RPF. That was in 2006. The aim was to establish whether the Kagame camp shot down the plane of then-president Habyarimana. The attack on April 6, 1994 is seen as the starting point of the genocide. In 2010, a Rwandan commission found that the Hutu regime was responsible for shooting down the plane.

The issuing of an arrest warrant by a French judge against Kagame and other senior officials of his ruling party marked the beginning of the Franco-Rwandan diplomatic standoff. Understandably, as those who defend this version of the story argue that Habyarimana's killers condoned the escalation of the conflict and the genocide in order to make way for the RPF's offensive. The RPF, on the other hand, views itself as having liberated the country and having ended the genocide.

There are more questions to be answered, however, says Ndagijimana. As the Rwandan ambassador at the time, he says he tried to send messages to the RPF leadership through RPF representatives in Belgium and Canada, to negotiate a ceasefire to stop the killings.

"They said: It has nothing to do with us if Tutsis are being killed over there. We want to bring back the Tutsis who have been living in exile. Those who stayed, did so to support Habyarimana," Ndagijimana said. The RPF rebels told Romeo Dallaire, who headed the UN mission to Rwanda, the same thing, he argues. In his book "Shake Hands with the Devil," Dallaire describes Kagame's "pragmatic" stance on the matter when he asked him about what would happen to civilians during the siege on Kigali: "[The Rwandan government forces] are practicing their age-old blackmail methods and it will not work anymore. There will be many sacrifices in this war. If the refugees have to be killed for the cause, they will be considered as having been part of the sacrifice."

The nine experts, whom France has now charged with the examination of archived documents, have a big task on their shoulders. The team is made up of French historians, genocide researchers, and archive experts. There are no experts in Rwandan history. There is a reason for this, explains commission head Vincent Duclert, himself an expert on the Armenian genocide. "Even within academic circles there is a strong polarization on the topic of Rwanda," Duclert told DW.

Observers are also looking forward with anticipation to the naming of an international academic committee of regional experts on Rwanda. Prominent experts and eyewitnesses should make statements to the commission, says Duclert.

He also wants his commission to present its results to the  committee of regional experts. A president of the committee could be named in the coming weeks, while other members will probably only be named later in the year. The commission's findings are to be published and some of the archive material will be made available to the public. In this way, people will be able to gain a deeper understanding of what happened, says Duclert. "And in two years' time Emmanuel Macron will be able to hold the speech that had been expected of him on the 25th anniversary of the genocide."