The new iPhone is in high demand - but promised improvements at its manufacturer have not happened. An employee of the Foxconn factory in Taiyuan, China, tells DW about the working conditions. 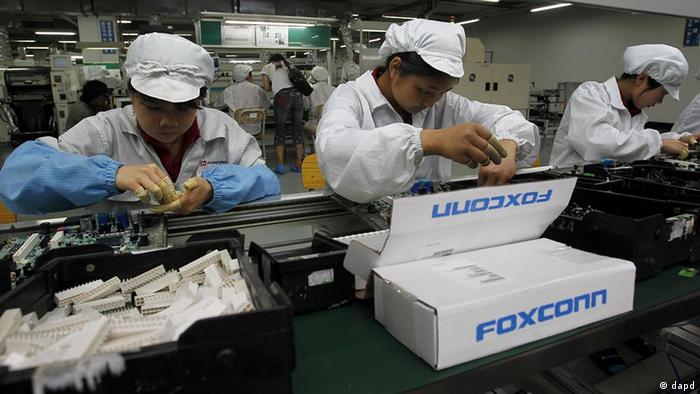 DW: In March 2012, the new Apple CEO Tim Cook announced a fight against illegal overtime in its suppliers' factories. At that time, he promised to raise the living standards of the workers. But a few days ago, a journalist from Shanghai reported on poor working conditions and illegal overtime. Are these reports correct?

Foxconn employee: Yes, we work very hard here. The work is very demanding, the salary levels are low. I myself have to work night shifts, in some cases seven hours at a time - without a break. 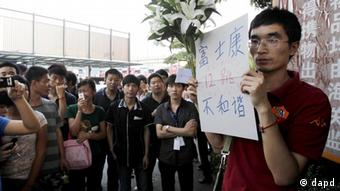 Foxconn workers protested the 10th employee suicide in Shenzhen: A young man jumped to his death after being overworked

The pressure to perform is high, my monthly salary is just 1,550 yuan [approx. 190 euros], which makes an hourly wage of around 1 euro. Even with overtime, the monthly income is very low, because our cost of living is constantly rising. In addition, the factory treats its workers very harshly. Whoever does a good job gets no recognition. But whoever works less well is criticized. That gets on your nerves.

You said that the factory is very harsh with workers. Can you elaborate?

Our boss requires only obedience; we are like machines; the factory only wants to control us. There is even a Foxconn slogan: "Outside the laboratory, there is no high tech, there is only obedience and discipline."

Where did you hear this slogan?

It's hanging on the wall as a slogan, as a sort of "corporate culture." The bosses always say it would be good for us, we could make more money if only we stay obedient. New workers are told: "Do just what your shift supervisor demands and offer no resistance." This means you may not express your own wishes. For example, we have no generally agreed break times. We can only go on break if the shift manager allows us.

Just a few months ago, when the new Apple CEO Tim Cook visited China, Foxconn announced that the work week amounted to a maximum of 49 hours, including overtime, and that this limit is strictly enforced. Is this not implemented in your factory?

This is nothing but fine words: When we were initially trained, it was said that we would get a ten minute break every two hours, but in reality I never saw this had any effect. They also told us that the night shift begins at 8 p.m., three hours later there would be a food break, but we are also not given the full length. After eating, you have to work without a break to 7 a.m. That's more than seven hours at a time - every night! The Chinese labor law stipulates that a worker may not take more than 36 hours overtime per month. But here in the factory, the workers do up to 80 hours of overtime a month.

But you and your colleagues are staying with the company. Why? 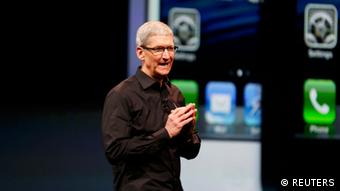 An experienced colleague told me once that nobody is forcing me to stay here. If you complain, you will very likely incur the wrath of the shift supervisor. But even the shift supervisor cannot force you to keep going if you do not want to. But then the boss appears. He threatens you. Or he tries to persuade you, with slogans such as "We all come here to earn money. Two hours extra work also mean a little more money" But for two extra hours I get only 30 yuan, even a meal costs around 20 yuan.

With the massive overtime, Foxconn has far exceeded the legal limit. Doesn't the company have any fear that its employees could go public with the poor working conditions?

I have the feeling that Foxconn management is not worried at all. On the contrary, Foxconn has received a lot of support from the government. In recent years the company has strongly expanded its market share in China. Because Foxconn creates many jobs and pays a lot of taxes, the government sometimes looks the other way. Foxconn CEO Terry Gou has made no secret of this. He said if the working conditions in his company were "problematic," Foxconn would have long since been "destroyed" and would have had no chance to develop so rapidly on the Chinese market.

To protect our informant, the interview was conducted anonymously. The identity of the Foxconn employee is known to DW.

Questions by Yanyan Han. Translated from the Chinese by Mu Cui and Simon Bone.