Wolfsburg snatched victory away from Leverkusen in a thrilling game on carnival weekend. Bayern fired eight past a hopeless Hamburg, while Bremen edged out Augsburg in an exciting afternoon of Bundesliga football. 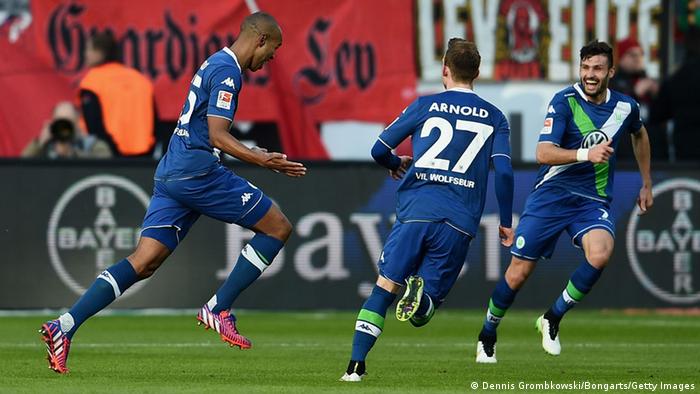 In one of the most dramatic games in Bundesliga history, Wolfsburg beat Leverkusen 5-4 thanks to a last-gasp winner from four-goal hero Bast Dost. The Dutchman sneaked in at the near post to steal the three points from a Leverkusen side that had recovered from 3-0 down.

Wolfsburg had never won in Leverkusen, but they took the lead when Vieirinha's cross was missed by Kyriakos Papadopoulos, allowing Dost to head home after just six minutes.

The visitors doubled their lead when goalkeeper Bernd Leno misjudged Naldo's long-range free kick, flapping at the bouncing ball but unable to keep it out. Soon after, Kevin de Bruyne delivered a low cross from the other wing, and Dost nonchalantly flicked home towards the back post to make it 3-0 Wolfsburg at half time.

Roger Schmidt made all three of his changes at the breaking, hauling off Lars Bender, Hakan Calhanoglu and Stefan Kiessling for Julian Brandt, Simon Rolfes and Josip Drmic. The changes worked as Leverkusen pulled a goal back, but in fortuitous fashion.

Heung-Min Son tapped a ball that looked to be under Diego Benaglio's control into the back of the net and despite protests from the Swiss goalkeeper, the goal stood. With Wolfsburg rattled, Son took advantage of a long ball to steal in for a second.

Wolfsburg went down the other end and immediately restored their two-goal lead, Dost tucked home at the back post after a smart team-move to seal his hat-trick. South Korean attacker Son was keen not to miss out and he too scored a hat-trick when he curled in after cutting in, making it 4-3. With 20 minutes to go, Leverkusen drew level when Karim Bellarabi seized on Robin Knoche's mistimed header to burst through and fire past Benaglio.

Emir Spahic picked up a second yellow for a flailing arm, leaving the hosts a man down in the final ten minutes, but Schmidt's men looked to have done enough before Dost landed his final blow. 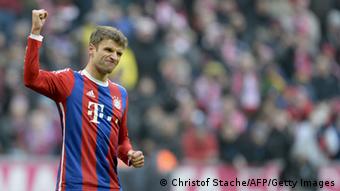 Müller's penalty was a game changer

Holger Badstuber returned to the Bayern line-up for the first time since matchday three as Pep Guardiola's men took until the 20th minute to score their first against Hamburg. Once they did though, they couldn't stop as they secured their biggest win in the Bundesliga in over 20 years.

Defender Ronny Marcos was judged to have handled the ball from Rafinha's cross, and Thomas Müller converted the penalty. Two minutes later, Mario Götze knocked in a rebound to double Bayern's lead and Arjen Robben curled in a beautiful third to all but end the contest by half time.

In the 100th edition of the so-called North-South derby, Hamburg were further embarrassed in the second half. Robben cut outside to fire in a fourth at the near post, then Müller curled in a fifth with a gorgeous first-time effort before setting up Lewandowski who made it 6-0.

Hamburg scored but had it wrongly ruled out for offside on a day when nothing went right for them, before substitute Franck Ribery put in a rebound and Götze powered home his second and Bayern's eighth.

With western Germany's famous carnival season in full swing, around 1,000 officers were out in force to police Gladbach's home match with Cologne, but trouble brewed early when firecrackers were set off before the game and just after half time.

And when an unmarked Granit Xhaka headed past Cologne goalkeeper Timo Horn from a fortunately-awarded free kick in stoppage time, around 30 visiting fans wearing masks and white painter's suits waited for the final whistle before storming the pitch. 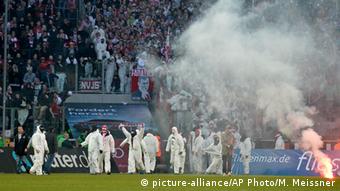 Trouble flared at the end of the match in Gladbach.

Flares were thrown onto the field in the chaos and the group scuffled with security staff and police while an officer was hurt before order was restored. Police made two arrests.

"These are not fans, they only harm the club," said Timo Horn.

The Cologne stopper was the only member of Peter Stöger's men to put on a show against Gladbach, keeping the visitors in the game with saves from Julian Korb, twice from Patrick Herrmann, and from Xhaka.

Viktor Skripnik's team put in another sterling display to maintain their spot at the top of the Bundesliga form table in the last six games. Lukimya powered home a header to give Werder the lead and spark a rush of goals. Ragnar Klavan instantly went down the other end and headed Augsburg level before the Estonian fouled Davie Selke in the area, leaving Franco di Santo to score his tenth goal of the season.

Bremen didn't let up and a minute before the break, Gebre Selassie headed in from a corner to make it 3-1. Pierre Emile Hojbjerg flashed a header narrowly over but Augsburg were second best. Zlatko Junuzovic, who delighted Werder fans by renewing his contract this week, crashed a half-volley onto the bar as Werder stayed in control.

As the game headed into the final ten minutes, Tobias Werner smashed the ball home after a goalmouth scramble following a corner to make for an exciting finale. Werder not only held on, but could have added more - Junuzovic sent a bouncing free kick onto the far post.

Elsewhere, neither Hoffenheim or Stuttgart had won in 2015, but it was the hosts who ended their poor run of form thanks to a last-minute winner from Sebastian Rudy. Roberto Fimino had put the home side ahead with a close-range finish, but Stuttgart's Gotoku Sakai bundled in an equalizer off Ermin Bicakcic shortly before the break to draw things level and end Stuttgart's 448-minute run without a goal.

Schalke's recent unbeaten run came to an end following a 1-0 defeat in Frankfurt. There's little respite for the Royal Blues who face Real Madrid in the Champions League this week, and then Werder Bremen and Dortmund. (14.02.2015)

Reus writes the lines as Dortmund down Mainz

The loudest cheers before kick-off greeted the name of Marco Reus, who this week extended his contract with BVB until 2019. And the homegrown 25-year-old showed his worth with a stellar display to help beat Mainz, 4-2. (13.02.2015)